Can NCAA remain step ahead of latest threat to amateurism? 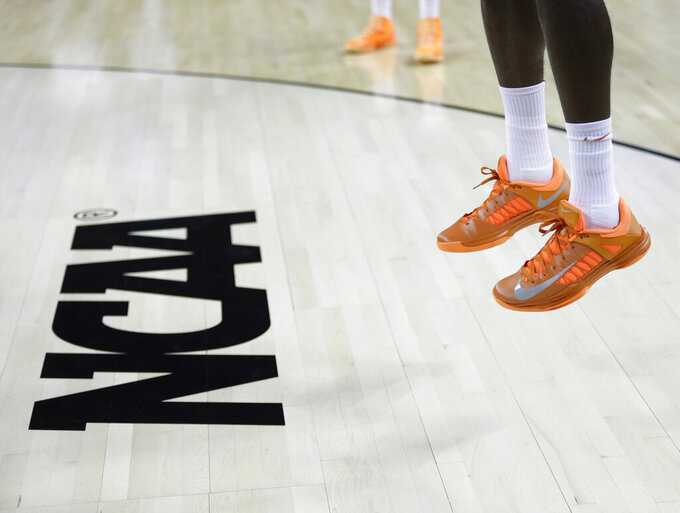 FILE - In this March 21, 2013, file photo, an athlete jumps near the NCAA logo during practice for a second-round game of the NCAA college basketball tournament in Austin, Texas. Defying the NCAA, California's governor signed a first-in-the-nation law Monday, Sept. 30, that will let college athletes hire agents and make money from endorsements — a move that could upend amateur sports in the U.S. and trigger a legal challenge. (AP Photo/Eric Gay, File)

The NCAA and the billion-dollar enterprise that is big-time college sports have been facing targeted attacks on amateurism rules for more than a decade. Each one threatened to bring down the governing body and fundamentally change college sports forever.

The NCAA has lost court cases, made modifications to its bylaws — some would say it has been forced to make changes — and claimed victories because the foundation of college sports remains intact: The athletes are not paid by the schools to play.

And business continues to boom.

The latest threat is California's Fair Pay to Play Act signed into law Monday by Gov. Gavin Newsom. It will require NCAA schools to allow athletes to profit from their names, images and likenesses through things such as endorsement deals or autograph signings. Right now that's against NCAA rules. Other states are looking into similar legislation. California's goes into effect in 2023.

Is the California law what finally brings down the NCAA or is it just another course correction in the evolution of college sports?

"A top NCAA official told me earlier this year: We only change if we are forced to do so through a lawsuit or public shaming," said Tim Nevius, a former NCAA investigator and college baseball player who is now an attorney advocating for the rights of college athletes.

In recent years, NCAA member schools have passed legislation that has increased the value of an athletic scholarship to include the federally regulated true cost of attending a school, provided unlimited meals for college athletes and put more defined restrictions on the amount of time coaches can require players to take part in team activities. The cost-of-attendance stipend was passed in 2015, months after a federal judge ruled against the NCAA in the so-called O'Bannon case, saying rules prohibiting schools from providing that money were against antitrust laws.

Nevius said he believes the California law has the potential to be more impactful than antitrust lawsuits against the NCAA and a failed attempt to unionize players at private schools.

Where we go from here depends on the NCAA's response, Nevius said. NCAA officials have suggested willingness to change but only on their own terms.

"We will consider next steps in California while our members move forward with ongoing efforts to make adjustments to the NCAA name, image and likeness rules that are both realistic in modern society and tied to higher education," the NCAA said in a statement.

An NCAA working group is expected to deliver a report on what can be done with name, image and likeness rights in October.

"The easiest thing that they could do is simply change the rules to afford equality on this topic for all college athletes at all schools and it would not only benefit the athletes but would potentially bring more revenue into the system itself," Nevius said. "That would be the logical and rational thing to do here. Given their history of trying to obstruct this type of progress I wouldn't be surprised if they file a lawsuit."

Those who have championed the California law have hailed the bipartisan support for it — not only in that state but across the country. A similar bill in South Carolina is being pushed by Democrats. On a national level, U.S. Rep. Mark Walker, R-N.C., co-sponsored a bill that would change the federal tax code to remove NCAA restrictions on name, image and likeness compensation for student-athletes.

"The NCAA will get on board or be plunged into irrelevance," said Ramogi Huma, a former UCLA football player. Huma is the executive director of the advocacy group National College Players Association that attempted to win the right for players to unionize at Northwestern in 2016.

The NCAA could make incremental changes to its name, image and likeness rules and fight the California law in the courts before it even takes effect. Other states could move to pass similar laws to go into effect sooner. The NCAA could respond to court losses with more concessions.

"I think the main risks here for the NCAA is not necessarily the specific changes to name, image, and likeness," Feldman said. "I think the bigger risk is loss of control of our overall governance."