In college gymnastics, the ripple effect of real "air time" 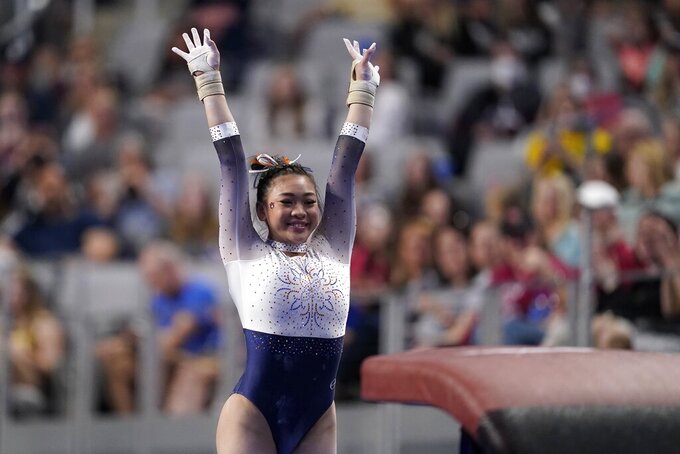 Auburn's Sunisa Lee raises her arms after competing in the vault during the NCAA women's gymnastics championships Thursday, April 14, 2022, in Fort Worth, Texas. (AP Photo/Tony Gutierrez)

FORT WORTH, Texas (AP) — The then-fledgling SEC Network needed content when it launched in 2014. The gymnastics programs within the conference needed a way to showcase their burgeoning talent.

And “Friday Night Heights” was born. It seemed like a win-win for a sport that has historically struggled to generate widespread public interest outside of the Olympics. Longtime LSU coach D-D Breaux was among the skeptics.

“She was (ticked) off to say it quite bluntly,” said Kathy Johnson Clarke, a two-time Olympic medalist turned commentator for ESPN. “She was afraid we were going to ruin college gymnastics.”

Breaux feared if people could watch the meets on TV, they wouldn't come to the arena to support the Tigers. It wasn't until Breaux caught one of the broadcasts — taut 90-minute affairs that crammed all of the emotion of a football game into half the time — that she realized she was on the wrong side of history.

“The opposite of what she was worried about happened,” Johnson Clarke said. “They started packing the arena and started selling out crowds. We increased their exposure. It was an exponential shot in the arm for these programs.”

The sport, too. The increased visibility made college gymnastics more tangible to high-level club gymnasts. The number of Level 10 gymnasts competing in 2013 was around 1,600. That number has nearly doubled since “Friday Night Heights" debuted, the “if you can see it, you can be it” axiom playing out in real-time.

It's not an accident that Saturday's NCAA championship featuring Florida, Oklahoma, Utah and Auburn will air on ABC. A year ago, the broadcast drew 808,000. With reigning Olympic champion Sunisa Lee now competing for Auburn and programs with large alumni bases like the Gators and Sooners involved, there's a chance viewership could reach seven figures.

Yet the coverage isn't limited to linear TV. ESPN brought 82 credentialed staffers to Dickie's Arena for the semifinals and finals, with a streaming broadcast that will allow fans to not miss a routine.

“(Gymnastics) has always performed, the last few years it’s been amazing,” said Dan Margulis, ESPN's senior director of programming and acquisitions. “The connection to the Olympics and people staying in college and people are helping the sport grow. It’s been a fantastic partnership for us.”

One that evolved with a few tweaks along the way. At the suggestion of producer Meg Aronowitz, the network adopted a running score chryon in the bottom of the screen — like what you will find during a football or basketball game — that gives viewers immediate feedback on where things stand at any given moment.

Rather than wasting time setting up the meet, the action starts almost immediately. Routines begin less than a minute into the broadcast and it wraps up just an hour-and-a-half later with little filler in between.

“It's like ‘Wheel of Fortune,' you know what you're going to get,” said two-time Olympic medalist and commentator Bart Conner. “If it starts at 7, at 7:01 we're going and the last vault is 8:28 and 30 seconds. Then it's a winner and we're out."

Television in gymnastics now has become what it once was for high-profile football programs: a chip that coaches can use on living room couches across the country.

“I just think there's a greater awareness because of things like SEC Network, it's one of the things that attracted me (to Arkansas)," said Olympic gold medalist and Razorbacks coach Jordyn Wieber. “And I think it attracts a lot of recruits. Their parents get to watch them if they can’t make the meet."

And just like any other athlete, the idea of knowing they're going to be on TV has an appeal all its own. When Oklahoma junior Ragan Smith caught “Friday Night Heights," the 2017 U.S. gymnastics national champion saw a vibe she didn't know she needed.

“It just looked really fun," Smith said, later adding, “in college, it looked like everyone is enjoying themselves.”

Networks have made it a point to try and capture that enthusiasm. Cut to the student sections, ones that are filled now far more than they used to be. Catch a glimpse of Lee and the rest of the Tigers passing around t he “stick shades” after nailing a dismount. Find the teammates mimicking each other's floor routine as a sign of solidarity.

The athletes don't view the camera as obtrusive but something else entirely.

“They get it,” Johnson Clarke said. “They've been watching these shows. They talk to each other. They watch each other. And they know others are watching too.”

More and more of them as ratings and interest continue to climb.