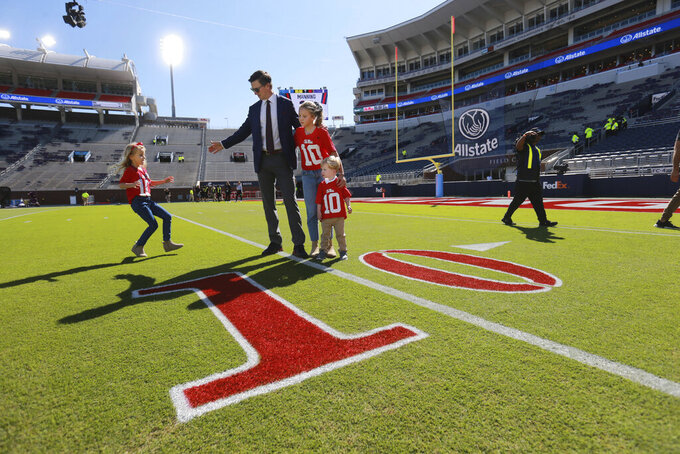 Former Mississippi quarterback Eli Manning and his children get together for a photograph around the "10" yard mark that has been painted red in his honor at Jerry Hollingsworth Field in Oxford, Miss., Saturday, Oct. 23, 2021. The school will retire his number during a halftime ceremony of an NCAA college football game against LSU. (Thomas Wells/The Northeast Mississippi Daily Journal via AP)

OXFORD, Miss. (AP) — Lane Kiffin is not ready to proclaim No. 12 Mississippi as an elite team. Not yet, anyway.

“We’re good, but not great. But we’re close,” the coach said after the Rebels defeated LSU 31-17 Saturday with 31 unanswered points that spanned the second and third periods.

“We’ve got to get healthy. If we can do that and execute, then we could be a really special team," he said.

The Tigers lost in their first game since it was announced Orgeron wouldn’t return next season. A former Mississippi coach, he led the Tigers to the national championship less than two years ago.

Mississippi retired the No. 10 jersey of former All-America quarterback Eli Manning at halftime. The capacity crowd of 64,523 enthusiastically cheered Manning and his family members during the tribute.

“It was a good day and a good win,” Kiffin said.

Trailing 7-0, Corral led four consecutive scoring drives, including a 3-yard touchdown run and a 2-yard touchdown pass to Casey Kelly. The Rebels led 17-7 at halftime and kept pulling away.

Corral enhanced his status as a Heisman Trophy contender with an efficient performance after being considered questionable from injuries sustained in last week’s win over Tennessee. He finished 18 of 23 passing for 185 yards, rushed for 24 yards, including three third-down conversion runs before yielding to reserves in the final period.

“Just execute and trust. It’s just a matter of selling out every play and executing,” Corral said. “We have the plan. We have the scheme. We have the coaches. Everything is in place. I do my job and what I do sends a message to the team.”

Henry Parrish Jr. scored on a 5-yard touchdown run and Jerrion Ealy ran for a 36-yard score for Mississippi. The Rebels had 470 yards of total offense, with Snoop Conner running for 117 yards on 14 carries. Dontario Drummond had a game-high eight catches for 93 yards.

“We did a real good job in the run game,” Kiffin said. “When your quarterback is banged up and battling, those backs have to step up. I thought they did and ran hard today.”

LSU led 7-0 on a 1-yard run by Tyrion Davis-Price, but managed only 51 yards of total offense during the 31-point outburst by Ole Miss.

“We did not capitalize in the first half and you’ve got to score to beat this team,” Orgeron said. “We didn’t make plays. I didn’t think we won the line of scrimmage.”

The retirement of jersey No. 10 for Manning was the latest family tribute by Ole Miss, which features the family legacy prominently throughout the campus and athletic facilities. The campus speed limit has officially been listed as 18 mph since the late 1960s, in honor of father Archie Manning’s jersey number, while campus roads, athletic and educational facilities prominently showcase the Manning name.

“I never thought about this day ever happening. I hope my parents are proud of me,” said Manning, honored earlier this season by the New York Giants after guiding two Super Bowl title teams in a 17-year career. “To have my number up there with dad is pretty awesome.”

Capping a dominant first quarter with a 7-0 lead, LSU gambled on a 4th-and-goal at the Ole Miss 3-yard line. Max Johnson, under a pass rush from Ashanti Sistrunk, threw an interception at the 1-yard line to Tysheem Johnson to finish the threat. Ole Miss responded with four consecutive scoring drives and LSU never seriously threatened again.

“That was a big stop, big stop,” Kiffin said. “It was huge momentum. Snoop followed it by running it out of there and the game went our way.”

LSU: The Orgeron era, which includes a 2019 national title, still has an opportunity to finish above the .500 mark overall with a strong November run that includes three home games. He is 49-18 in six seasons at LSU.

After rushing for 321 yards in the previous week’s win against Florida, the Tigers struggled to rush for 77 yards, including 53 from Davis-Price.

Ole Miss: The win snapped a five-game losing streak to the Tigers and kept Mississippi in line for extensive team and individual honors. ... After a sluggish opening quarter, the Rebels dominated defensively, forcing three turnovers with five sacks and seven tackles for loss. For the first time since 1999, Ole Miss recorded five sacks in consecutive games.

Seven teams with one loss, including the Rebels, were ranked in the No. 4 through No. 15 slots this week, so Ole Miss did nothing to hurt itself. A solid win in a historic rivalry should keep the Rebels in position to merit consideration for a Top 10 slot.

Ole Miss: The Rebels visit No. 19 Auburn on Saturday.