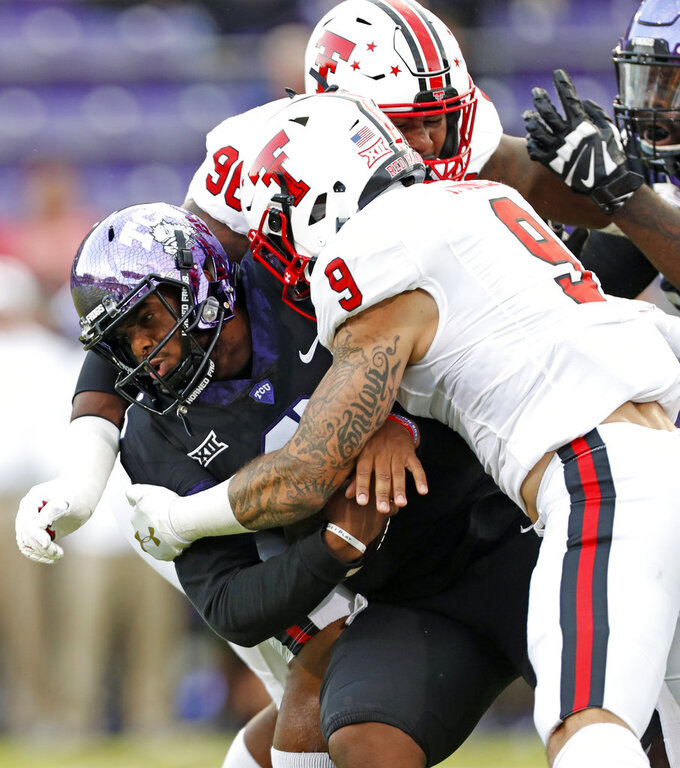 TCU's Shawn Robinson (3) is tackled by Texas Tech's Tony Jones (9) and another player during the first half of an NCAA college football game Thursday, Oct. 11, 2018, in Fort Worth, Texas. (Brad Tollefson/Lubbock Avalanche-Journal via AP) 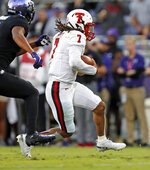 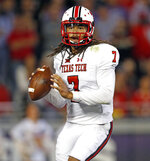 FORT WORTH, Texas (AP) — Jett Duffey got his first start for Texas Tech with two other quarterbacks hurt, and one of them actually replaced him after halftime.

After McLane Carter played only one series on his sprained left ankle that wasn't ready for full-speed action, Duffey returned to throw a 62-yard touchdown pass and scored the go-ahead touchdown on a 38-yard draw play as the Red Raiders beat TCU 17-14 on Thursday night.

"I was really proud of Jett. That's such a hard situation, first start ever and at halftime we're going to try something else," coach Kliff Kingsbury said. "Then have to put him back in, and find a way, dig deep, be mentally tough enough to handle that, make enough plays to win the game. I can't say enough about his mental toughness."

Duffey held on to the ball just long enough on his touchdown run with seven minutes left, on the first play after a punt by TCU (3-3, 1-2 Big 12). The score stood after a replay review.

Defender Trevon Moehrig-Woodard knocked the ball loose right at the goal line, and it rolled forward through the end zone. It was immediately signaled a touchdown for the Red Raiders (4-2, 2-1).

"They caught us in a blitz," TCU coach Gary Patterson said.

"The coaches on the Tech sideline they were waiting on that draw," TCU defensive end Ben Banogu said. "They saw we were in a three-man front and we got back in coverage and they kind of took advantage it and we didn't tackle."

Carter suffered a high left ankle sprain in the first quarter of the season opener. True freshman Alan Bowman replaced him, and was the nation's leading passer before a crushing blow in the last game that left him with a partially collapsed lung.

All three Tech quarterbacks took part in pregame warmups, though Kingsbury said Bowman was still staying engaged and was never going to play.

Carter took over after Duffey had only 40 yards passing and 37 rushing before halftime. Carter was 2-of-3 passing for 12 yards, but was sacked on consecutive plays on his only series.

Duffey finished 13-of-24 passing for 190 yards, including a 62-yard touchdown in the third quarter to Ja'Deion High, who was wide open at the 30 and ran the rest of the way — on a play that Kingsbury rushed his offense to the ball after seeing the desired coverage.

Duffey also had 16 carries for 83 yards.

The final drive for TCU ended when Shawn Robinson desperately scrambled from one side of the field to the other on fourth-and-1 before the ball appeared to slip out of his hands and was intercepted by Adrian Frye in the final minute.

Robinson was 26-of-45 passing for 290 yards with two touchdowns and two interceptions.

The Frogs were up 14-10 when KaVontae Turpin streaked past a defender and into the end zone to make a 31-yard TD catch with 11 minutes left. Turpin had six catches for 120 yards.

"This program's been here before gentlemen," Patterson said. "It doesn't look good when you're 3-3 and you're looking right down the middle of Oklahoma and they have two weeks to prepare for you."

Texas Tech: The Red Raiders were held to 353 total yards, well below their national-best average of 591 yards a game. They had also scored 48 points a game. But Duffey made enough plays, especially the two big touchdowns.

TCU: The Horned Frogs had their eight-game home winning streak snapped. They had 411 total yards, but couldn't overcome mistakes. They had three turnovers, including an interception in the end zone, and had a missed field goal attempt.

"We've got better players than what we did," Patterson said. "We can't turn the ball over. Our running backs have got to secure it better."

ANOTHER WIN IN FORT WORTH

It was the third time the Red Raiders won in their last four trips to Fort Worth. They needed multiple overtimes in each of the previous two wins. In the other game during that stretch, TCU won 82-27 in 2014.

Johnny Manziel, who won the Heisman Trophy as a freshman at Texas A&M in 2012 when Kingsbury was his offensive coordinator, attended the game during an open week on his CFL schedule. Kingsbury became his alma mater's head coach the next season.

"I've been begging him since 2013 to make it to a game," Kingsbury said. "I just told him thanks for finally coming. It's only been six years."