First-year coach Crean says Georgia has 'a lot to learn' 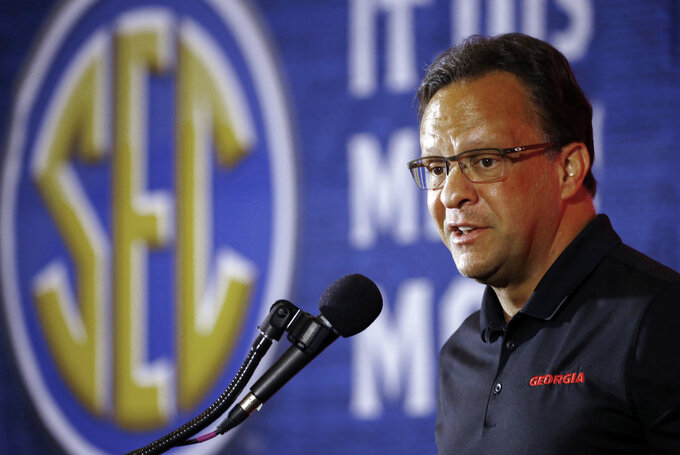 FILE - In this Wednesday, Oct. 17, 2018 file photo, Georgia coach Tom Crean speaks during the SEC men's NCAA college basketball media day in Birmingham, Ala. Tom Crean isn’t worried about the low expectations set on his new Georgia team from the outside. The first-year coach is just trying to make sure he doesn’t expect too much at the start of his ambitious task of making an also-ran program relevant in the Southeastern Conference and national scene.(AP Photo/Butch Dill, File)

ATHENS, Ga. (AP) — Tom Crean isn't worried about the low expectations set on his new Georgia team from the outside....

The first-year coach is just trying to make sure he doesn't expect too much at the start of his ambitious task of making an also-ran program contenders in the Southeastern Conference.

Georgia was picked by SEC media to finish 13th in the 14-team league. Crean has lofty goals, but he knows it may take time.

"I've got to make sure the expectations are not too high on them from me, not outside expectations," Crean said at the recent SEC's annual preseason media gathering. "We've got a lot to learn."

Crean, the former Indiana and Marquette coach, was hired to replace Mark Fox , who took Georgia to only two NCAA Tournaments in nine seasons. The Bulldogs finished only 18-15 overall and 7-11 in the SEC last season despite having standout forward Yante Maten return for his senior season.

Crean is implementing a new system with a heavy emphasis on 3-point shooting, even by frontcourt players not accustomed to having the ball on the perimeter.

Power forward Derek Ogbeide may spend most of his time closer to the basket, but the new look could be interesting for such other big men as Rayshaun Hammonds and 6-foot-11 sophomore Nicolas Claxton.

Ogbeide, a senior, says Crean's "unbelievable energy" is a hit with players .

"To bring that energy and that spark, it lights everybody else's energy up," Ogbeide said. "It gets us going and it's a brand new mentality for us."

Here are some more things to know about Georgia:

"We've got to keep that in mind every day as we're building," Crean said, adding his emphasis will be to build confidence in his shooters.

"The confidence comes when you're passing the ball, when you're moving around and getting open looks and creating space," he said.

Crean is married to Joani Harbaugh, the daughter of former longtime Western Kentucky football coach Jack Harbaugh and sisters to the first pair of brothers to be NFL coaches — Jim and John Harbaugh. Crean says that football is a family sport, it's only natural he has embraced his new job at Georgia, best known for its football tradition.

"I've embraced it," Crean said. "I knew that. It wasn't like Georgia was an unknown football program. I knew that walking in. I embraced that. I think it's fantastic. I'm in a football family. I loved football before but when you marry into the Harbaughs you really have no choice."

Freshman guard Ignas Sargiunas, from Lithuania, started in Georgia's exhibition win at UAB. That's far from any kind of lineup announcement. "We don't have anything close to a set lineup right now," Crean said.

However, Crean said he's been pleasantly surprised with how quickly his four freshmen have picked up his system.

Ogbeide, Hammonds and guard William "Turtle" Jackson are returning starters. Jackson is the leading returning scorer with his 2017-18 average of 8.4 points per game.

Georgia will play in the Cayman Islands Classic on Nov. 19-21. The Bulldogs will play Illinois State on Nov. 19, followed by a game against Akron or Clemson the following day and a third game on Nov. 21.

Among other notable nonconference games are a visit to Temple on Nov. 13 and home games against Arizona State, Oakland and UMass. The Bulldogs play at Georgia Tech on Dec. 22. Texas visits Georgia on Jan. 26 as part of the SEC-Big 12 Challenge.

Georgia's first regular-season game in the Crean era is on Nov. 9 against Savannah State.