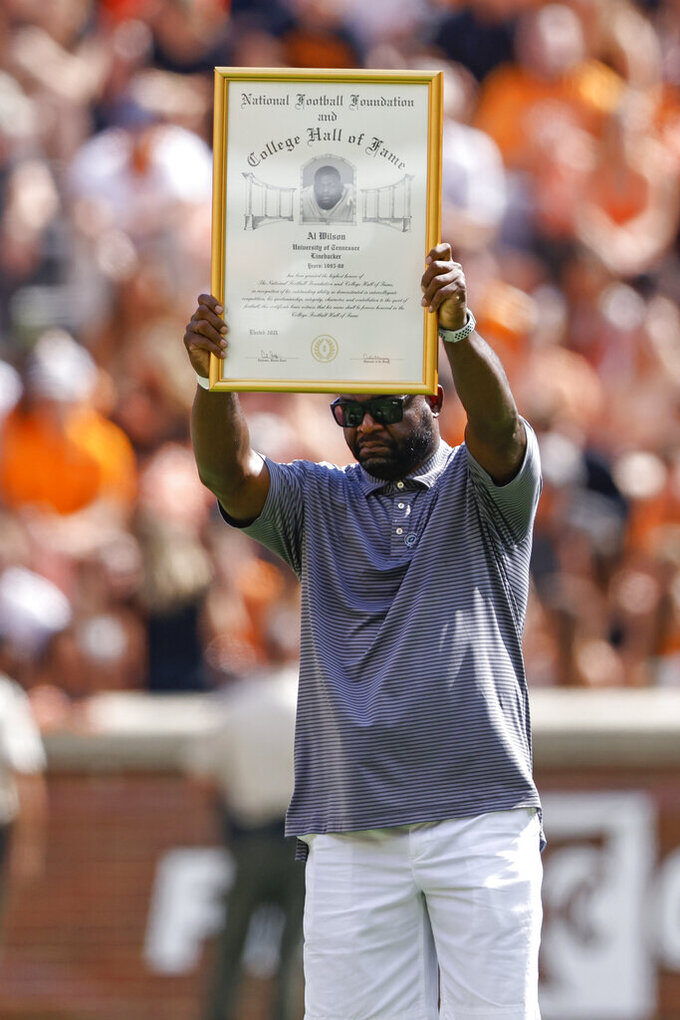 Former Tennessee linebacker Al Wilson holds up a plaque as his induction into the National Football Foundation and College Hall fo Fame is announced during halftime of an NCAA college football game against South Carolina Saturday, Oct. 9, 2021, in Knoxville, Tenn. (AP Photo/Wade Payne) 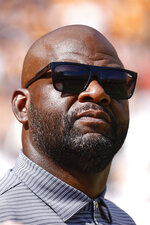 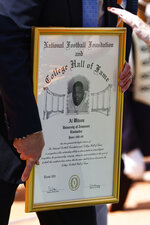 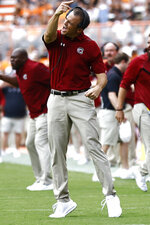 KNOXVILLE, Tenn. (AP) — Part of the growth process of a college football program is getting the players to believe.

“Our guys care about each other,” Heupel said. “They're prideful; growing really good habits. Just like I said last week, a win like this helps with the buy-in. If the players buy into the process, the results will come.”

Quarterback Hendon Hooker has been a big part of the buy-in. The Virginia Tech transfer, now 3-1 as a starter, threw for 225 yards and three touchdowns and ran for another.

Vols' running back Tiyon Evans rushed for 119 yards and a touchdown before leaving midway through the third quarter with an injury. Tennessee led 35-0 late in the first half before the Gamecocks made a run.

“Hendon continues to grow into complete command of the run game, pass game and taking care of the football,” said Heupel. “The players around him have responded in a positive way.”

South Carolina: The ability to run the ball on a consistent basis is a challenge the Gamecocks have to navigate in the process of establishing a solid program under first-year head coach Shane Beamer. After gaining 254 yards in the opener, USC hadn't rushed for more than 102 yards in its other four games. Against Tennessee, ranked No. 24 against the run, the Gamecocks gained 153 yards.

Tennessee: A program on the rise under first-year head coach Josh Heupel, Tennessee has proven it can be dominant among the bottom tier of SEC teams. The next step will come next week when Ole Miss, a quality team, comes to town.

When Tennessee's 1998 national championship team ran into rough spots along the way, it turned to captain Al Wilson for his leadership skills. Wilson will be inducted into the College Football Hall of Fame in December. Saturday was his on-campus salute. A highlight of the festivities was Wilson leading the team on the Vol Walk, which winds through campus on the way to the stadium. Wilson, who wore No. 27, had his number painted on the 27-yard line on both sides of the field as well as a plaque on the bricks surrounding the stadium.

South Carolina has been playing football for 115 consecutive years. This is the 30th season the Gamecocks have been in the SEC, joining the league with Arkansas. In those 30 years, they have rolled up a record of 99-137-1. Victory No. 100 could come next week against Vanderbilt.

Vols quarterback Hendon Hooker threw three touchdown passes in the first quarter. He has thrown at least two TD passes in Tennessee's last five games. The last Vols' quarterback to do that was Tyler Bray in 2012.

Saturday's Tennessee victory failed to follow the trend that had been popular in the last nine meetings between South Carolina and Tennessee. Since 2012, eight of the last nine games have been decided by six or fewer points. The teams had split those eight tight games.

South Carolina: The Gamecocks may have their best chance to break into the win column in the SEC when they entertain Vanderbilt next Saturday.

Tennessee: Suffice it to say, there will be plenty of action in Neyland Stadium next Saturday night when the Vols host Ole Miss. Those two teams lead Power 5 teams in average plays per minute (2.89).