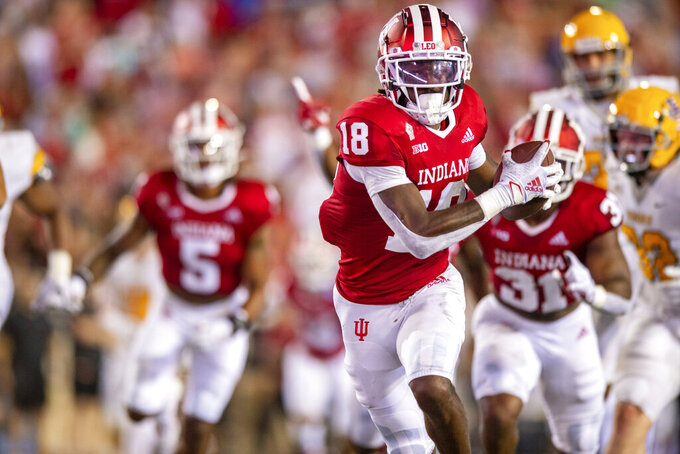 Indiana defensive lineman Jonathan King (18) runs the ball into the end zone to score after recovering a blocked Idaho punt during the first half of an NCAA college football game, Saturday, Sept. 11, 2021, in Bloomington, Ind. (AP Photo/Doug McSchooler)

Playing in front of the biggest home crowd since Nov. 23 2019, the Hoosiers gave the near-capacity fans plenty to cheer about. Indiana has won 18 of its last 20 home openers, perhaps none more impressively than this one.

The timing couldn't have been better after last week's embarrassing loss at Iowa, either. This time, the Hoosiers cleaned up the mistakes, made all the big plays and never gave the Vandals (1-1) a chance. They took a 21-0 lead after one quarter and made it 35-0 before Idaho recorded a first down.

“We were able to bounce back, address some things we needed to address and I think our guys responded in practice and the way we started,” Hoosiers coach Tom Allen said. “I thought special teams was special tonight."

For Idaho, it was a miserable night.

A first-quarter fumble by quarterback Mike Beaudry led to Penix's first scoring pass, a 9-yarder to Javon Swinton. Four plays later, Swinton scored again, returning a blocked punt 4 yards to make it 21-0. And before the first half ended, the Vandals also gave up an 81-yard punt return for a touchdown.

“Special teams was not good, not good at all," Idaho coach Paul Petrino said. “They scored 21 points on special teams. The offense wasn't very good but we still have to find a way to get more first downs."

Beaudry rebounded by throwing two touchdown passes to Hayden Hatten, one in each half, but it wasn't nearly enough.

Idaho: After blowing out Division II Simon Fraser 68-0 in the opener, the Vandals were overwhelmed by the Hoosiers. Idaho dropped to 0-5 against FBS teams since returning to the FCS Big Sky Conference in 2018. The Vandals are 0-4 all-time against the Big Ten, losing the last two by a combined 135-21.

Indiana: Yes, the Hoosiers failed to score a touchdown last week at Iowa. They had no trouble finding the end zone Saturday and with their harassing defense playing as well as advertised, it was a devastating combination. Much stronger challenges are coming during the next month.

Indiana’s D.J. Mathews Jr. delivered the back-breaking punt return with less than two minutes left in the first half. It was his second career return for a score — and he did it in spectacular fashion. Mathews made an over-the-shoulder catch on the run then sprinted from outside the hash marks on one side of the field to outside the hash marks on the other side and zig-zagged his way to the end zone.

“We make a huge emphasis on special teams every single meeting because I want guys to know how important they are,” Allen said. “This is a great position to be in but the players know how much it means."

Idaho: The Vandals had only one penalty and didn’t punt in their season opener but had eight penalties and punted seven times at Indiana. ... Hayden Hatten had 10 catches for 94 yards. ... Beaudry was 23 of 36 with 196 yards and two TDs. ... Idaho rushed 22 times for 65 yards. ... Punter Caleb Lightbourn had a second punt blocked in the fourth quarter, which also led to an Indiana TD.

Indiana: Former Southern Cal running back Stephen Carr carried 22 times for 118 yards, getting his first score and first 100-yard game of the season. ... Penix was 11 of 16 with 68 yards. ... The Hoosiers last scored two special teams TDs in one game Sept. 20, 1969 against Kentucky. ... Swinton was the first Indiana player to score on a blocked punt since 2003. ... Coach Tom Allen earned his 25th career win.

Idaho: Takes on another power-conference school next Saturday at Oregon State.

Indiana: Hosts No. 7 Cincinnati next Saturday, their first meeting since 2000.