Illini look for first win since August vs Charlotte 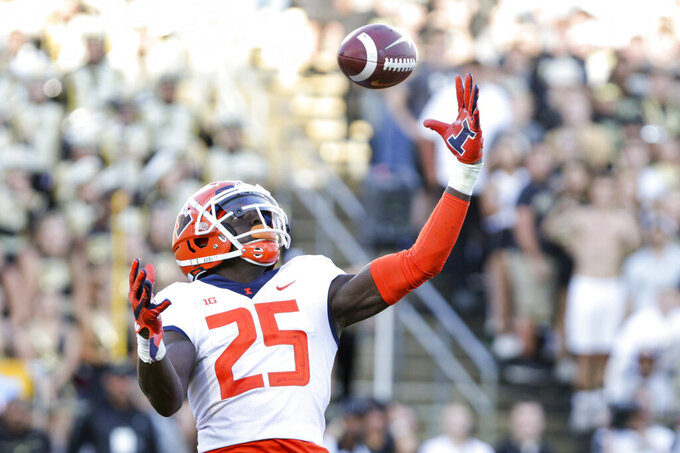 Illinois defensive back Kerby Joseph (25) intercepts the ball in the end zone during the third quarter of an NCAA college football game against Purdue Saturday, Sept. 25, 2021, in West Lafayette, Ind. (Nikos Frazier/Journal & Courier via AP)

CHAMPAIGN, Ill. (AP) — Illinois has not won a game since August and hosts a surging Charlotte team Saturday that is eager to knock off a Big Ten opponent.

Illinois’ last victory was the 30-22 season-opening win over Nebraska on Aug. 28. The Illini (1-4, 1-2 Big Ten) have lost all four games since. Three of those were games where Illinois was either tied or down by less than one score with the ball in the final minute.

First-year coach Bret Bielema said his team is working on how to close out tight games.

“Everybody wants to concentrate on why we lost, and believe me I’m diving into that knee deep and going through it. But I want you to understand that it’s actually a step in the right direction to be disappointed that we finished close,” Bielema said. “We’ve got to get ourselves back on track.”

The 49ers' dynamic receiving duo of Victor Tucker and Grant DuBose have each recorded two 100-yard performances through the first four weeks of the season, against Middle Tennessee and Duke.

Third-year 49ers coach Will Healy has been impressed with Tucker’s performance so far.

“We lost last week, we knew that we needed that win and it was a conference game,” DuBose said. “We have a Power Five opponent (this week) with Illinois, so it’s just about gaining momentum for our offense. That’s what we need after only putting up seven points last week.”

Reynolds broke the school record for career passing touchdowns in the 41-38 win over Middle Tennessee, passing for 339 yards and four touchdown passes. He has 45 career touchdown passes for a program that only joined the Bowl Subdivision in 2015.

“Reynolds is a very talented, accurate thrower,” Bielema said. “He’s got a lot of skill around him both at the running back and wide receiver position.”

Illinois is again starting super senior Brandon Peters at quarterback, despite his struggles since returning from an injury in the season opener. Peters threw for 185 yards and an interception against Maryland and for just 100 yards at Purdue. He has yet to throw a touchdown pass.

Defensively, Illinois is 12th in the nation and tied for the Big Ten lead in takeaways with nine.

Tony Adams and Kerby Joseph both had second-half interceptions at Purdue last week despite the defense playing without starting cornerback Devon Witherspoon, who is eighth in the nation in passes defended per game (1.8), and star linebacker Jake Hansen, considered one of the finest linebackers in the nation.

Both Witherspoon and Hansen are expected to miss Saturday’s game.