Illinois hopes to tame Wildcats, move up in bowl spot 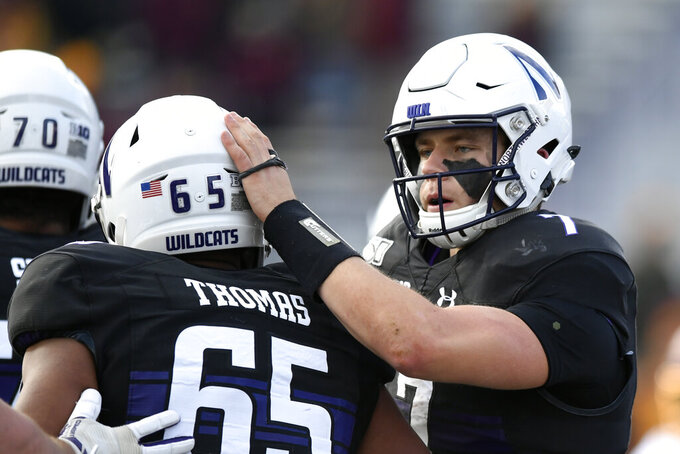 Northwestern quarterback Andrew Marty (7) celebrates with teammate Jared Thomas (65) after rushing for a touchdown during the second half of an NCAA football game against Minnesota Saturday, Nov. 23, 2019, in Evanston, Ill. Minnesota won 38-22. (AP Photo/Paul Beaty)

CHAMPAIGN, Ill. (AP) — Illinois has already clinched eligibility for a bowl and a win over Northwestern on Saturday could help land a more prestigious postseason destination.

Trouble is, the Illini aren’t sure if Brandon Peters will start at quarterback.

Ahead of the Thanksgiving holiday, coach Lovie Smith would only say: “We’ll see how it goes as we go along throughout the week.”

Peters left last week's loss at Iowa in the fourth quarter after taking a hit in the face and looked woozy leaving the field. Peters is ranked fifth in the Big Ten with 17 touchdown passes and has a touchdown pass in all but one game he’s finished (the 24-6 win at Purdue) this season.

Northwestern (2-9, 0-8 Big Ten) clinched its worst record in coach Pat Fitzgerald’s 14 seasons with a 38-22 loss to Minnesota. The best the Wildcats can hope for is to finish 3-9 for the first time since 2002 under the late Randy Walker.

Northwestern is in danger of going winless in conference play since the 1998 team dropped all eight conference games in Gary Barnett’s final season. The Wildcats haven’t finished with fewer than three victories overall since 1993, when they went 2-9.

“I have 100% confidence we’ll be right back to competing for Big Ten West championships,” Fitzgerald said, echoing comments he’s made in recent weeks. “Without a doubt in my mind.”

If Peters is unable to go for Illinois (6-5, 4-4), sophomore Matt Robinson would likely get the call on Saturday and true freshman Isaiah Williams is also available.

“If that’s the case where any of our backups have to go, but at the quarterback position, Matt has played," Smith said Monday. "I mean, we were down by 28 points to a good team, a top-10 team (Michigan), and Matt brought us back almost to upset them.”

“Should he have to go, I'd be comfortable with Matt Robinson,” Rod Smith said. “The critical part of that with Matt and Isaiah is how you learn from your mistakes. Hopefully, Matt has learned from his mistakes.”

Illinois is favored by 21 points, but Lovie Smith shrugged that off.

“Any team coached by Pat Fitzgerald, you know how they're going to play — 60 minutes, clean football all the way,” Smith said. “But we're going to be doing the same thing, so we're excited about that. "

Andrew Marty will get a chance to make his first career start for the Wildcats after replacing Hunter Johnson during last week’s game.

The sophomore came on in the second quarter after Johnson was 0 for 2 and sacked three times. Marty led three touchdown drives, running for two scores and completing 8 of 10 passes for 95 yards and a touchdown.

“We’re all proud of him,” Fitzgerald said. “Now, you’ve got another week. Go take advantage of it. Have a great offseason. Feel free to earn the job in spring ball, right?”

Marty broke camp as the fourth quarterback and played sparingly behind Aidan Smith and Johnson after TJ Green suffered a season-ending foot injury in the opener against Stanford. He hadn’t performed well consistently enough in practice, but will get another chance after a strong showing against Minnesota.

“I just made a couple bad mistakes in practice, didn’t get confidence in coaches and I didn’t really have confidence in myself,” Marty said. “But when it comes game time, I think you’ve just got to switch your mentality. And that’s what I did.”

The two schools are battling for the Land of Lincoln Trophy. Northwestern has a four-game winning streak in the series that dates to 1892, but the Illini have turned things around this year and are seeking their seventh win in a season for the first time since 2011 (and first time in the regular season since 2007).

By Cliff Brunt 4 minutes ago
By Ralph D. Russo 22 minutes ago
an hour ago
By The Associated Press 2 hrs ago
By Jim Litke 3 hrs ago