Kendall returns with West Virginia to face No. 5 Oklahoma 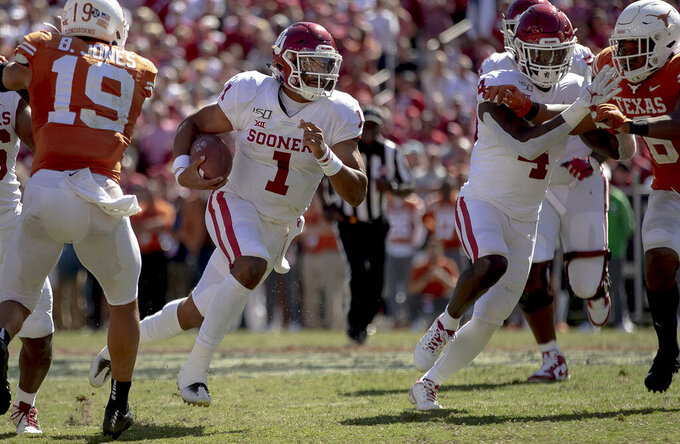 NORMAN, Okla. (AP) — Quarterback Austin Kendall always wanted to lead his football team onto Oklahoma's Owen Field, seeking a win over a Big 12 Conference rival before another sellout crowd. He will, though he will be wearing a West Virginia jersey while doing so.

Kendall, who spent the past three years as an understudy to Baker Mayfield and Kyler Murray at Oklahoma, transferred to West Virginia when it became clear he probably wouldn't move into a starting role with the Sooners. He will get a shot at his former team Saturday when the Mountaineers (3-3, 1-2 Big 12) visit No. 5 Oklahoma (6-0, 3-0).

It almost didn't happen. Kendall suffered a chest injury early during last Saturday's loss to Iowa State. West Virginia coach Neal Brown listed Kendall as questionable for most of the week before saying Thursday that Kendall indeed would start against the Sooners.

He has started every game for the Mountaineers this season. Kendall was Mayfield's backup in 2016, then redshirted in 2017, when Mayfield won the Heisman Trophy. Murray won Oklahoma's starting job last season and also went on to win the Heisman. In his two non-redshirt seasons with the Sooners, Kendall played in seven games and completed 28 of 39 passes for 265 yards and three TDs without an interception.

Oklahoma coach Lincoln Riley — who initially blocked Kendall's transfer to West Virginia before relenting — said it's an odd feeling to face one of his former quarterbacks.

"Guy was recruited and was here with us for three years, so it definitely feels a little strange," Riley said. "I've got to see bits and pieces of him. Obviously had a chance to study him a little bit more here this week. He's had some games where he's played really, really well.

"I'm sure he's champing at the bit to get back for this one. I would expect nothing less. I certainly hope he is healthy and always wish him the best."

Quarterback Jalen Hurts — whose transfer to Oklahoma led to Kendall's transfer to West Virginia — mostly has excelled in his first season with the Sooners after three years at Alabama. But he committed two costly red-zone turnovers (one interception, one fumble) in the first half against Texas that kept the game closer than the Sooners would have liked. Oklahoma still beat the Longhorns 34-27, but Hurts wasn't satisfied with that performance, saying he "just made a couple of bad decisions and put the team in bad situations."

It's something Riley has discussed with Hurts.

"Your bad decisions can't be turnovers," Riley said. "They've got to be incomplete passes. He knows he's got to be better there."

Since joining the Big 12 with the 2012 season, West Virginia has beaten every league opponent except for Oklahoma. The closest the Mountaineers have come were in 2012 (a 50-49 Oklahoma win) and last season, when the Sooners won 59-56 in Morgantown. Oklahoma leads the series 9-2.

Consecutive home losses to Texas and Iowa State have dampened the excitement surrounding West Virginia's 3-1 start, but Brown said the Mountaineers aren't discouraged heading into a tough stretch, with back-to-back games against Oklahoma and No. 18 Baylor.

"We're disappointed, but it's not doom-and-gloom in this building," Brown said. "We're not down and out. We've lost to three really good teams. We're playing 21 freshmen and sophomores right now. We're looking forward to finishing strong and it starts this week with a tremendous challenge but a great opportunity when we go to Norman."

Oklahoma receiver CeeDee Lamb has at least one touchdown catch in eight consecutive games, the longest active streak in the Football Bowl Subdivision.

With three touchdowns last week against Texas, Lamb - a junior - now ranks third on Oklahoma's receiving touchdowns career list with 28, trailing only Ryan Broyles (45) and Mark Clayton (31), both of whom played four seasons for the Sooners.