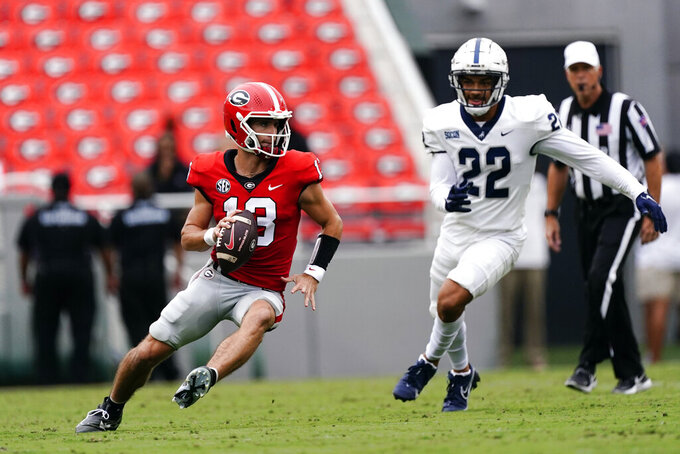 Things to watch in Week 3 of the Southeastern Conference:

New No. 1 team Georgia visits South Carolina. The defending national champion Bulldogs, who replaced Alabama atop The Associated Press rankings, have outscored their first two opponents 82-3 behind quarterback Stetson Bennett. Spencer Rattler and the Gamecocks are coming off a 44-30 loss to No. 10 Arkansas and face another huge challenge. It's even tougher given the season-ending ACL injuries to linebackers Jordan Strachan and Mo Kaba. But the Gamecocks' Rattler passed for 361 yards last week even though nearly half came in the fourth quarter. South Carolina has struggled to run the ball and faces one of the nation's best defenses.

No. 13 Miami (2-0) at No. 24 Texas A&M (1-1). The Aggies are trying to bounce back from a loss to Appalachian State that resulted in an 18-spot plunge in the rankings. They're favored by 5-1/2 points according to FanDuel Sportsbook. But a win against a higher ranked team would be a nice step toward restoring some of the luster to Texas A&M's season heading into SEC play. First-year Miami coach Mario Cristobal has his team off to a fast start, led by quarterback Tyler Van Dyke and former Mississippi tailback Henry Parrish Jr. Parrish ran for 58 yards on nine carries in the Rebels' win over the Aggies last season. Texas A&M coach Jimbo Fisher didn't rule out replacing starting quarterback Haynes King. “We're looking into everything,” he said.

Stetson Bennett. The Georgia quarterback may not get enough credit for his play but he's certainly getting the job done. Bennett is averaging a league-best 10.28 yards per pass attempt while completing 75% of his passes for 668 yards. He has three touchdown passes and hasn't been intercepted in 65 pass attempts. Bennett has emerged as one of the Top-5 Heisman candidates per FanDuel Sportsbook.

Penn State is set to become the first Big Ten Conference team to visit Auburn's Jordan-Hare Stadium. Other than last season's meeting, Auburn's only other regular-season games against the Big Ten ended in ties (Ohio State, 0-0 in 1917) and Wisconsin (7-7, 1931). ... Tennessee quarterback Hendon Hooker, the SEC offensive player of the week, has a school-record 167 straight attempts without an interception. ... LSU quarterback Jayden Daniels led the team to touchdowns on eight consecutive drives, including the first five against Southern and the last three versus Florida State. ... Florida quarterback Anthony Richardson faces South Florida again. In last year's game, his three passes went for 152 yards and two touchdowns while he rushed four times for 115 yards and a third score. ... If you take away three sacks, Alabama's Heisman Trophy-winning quarterback Bryce Young is averaging 18.3 yards on his nine rushes with a touchdown.

FanDuel.com lists No. 18 Florida (1-1) as 24.5-point favorites over South Florida (1-1). This game certainly may be that kind of mismatch, but the Gators have the challenge of responding to a 26-16 loss to No. 9 Kentucky and staying focused after back to back games against ranked teams. The game could be a character check for Richardson and Florida in trying to zero in on a lesser opponent. History wouldn't indicate the Gators will have a huge problem. Florida hasn't lost a regular season nonconference game since the start of the 2018 season, winning 13 in a row by an average of 26.3 points per game. The Bulldogs did have six rushing touchdowns against Howard, their most in a game since the same amount at Charleston Southern in 2003.