No. 10 Florida will be without top 4 pass catchers in Cotton 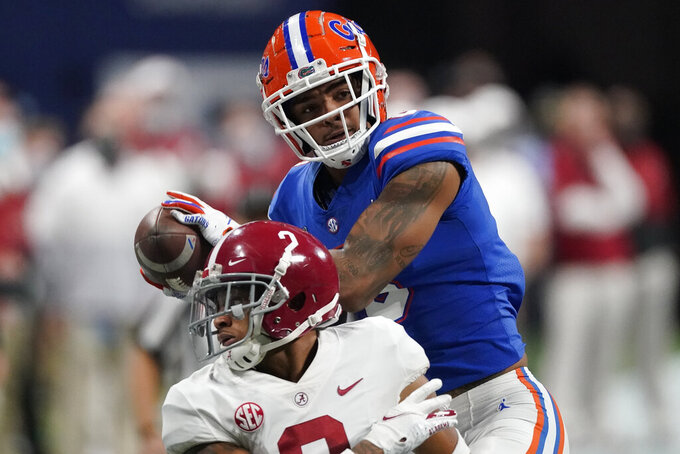 GAINESVILLE, Fla. (AP) — No. 10 Florida will be without its top four pass catchers in the Cotton Bowl against eighth-ranked Oklahoma.

Receivers Trevon Grimes and Kadarius Toney announced Monday they are skipping the game in Arlington, Texas, to prepare for their NFL futures. Fellow receiver Jacob Copeland announced he won't make the trip after testing positive for COVID-19. All-American tight end Kyle Pitts opted out of the bowl hours after the Southeastern Conference championship game.

Their absences leave Florida trying to replace four guys who combined to catch 174 passes for 2,778 yards and 34 touchdowns in 2020. Justin Shorter, Xzavier Henderson and Trent Whittemore are expected to get extra playing time in their place.

Grimes, a 6-foot-4 senior from Fort Lauderdale, thanked coaches for allowing him to transfer from Ohio State in December 2017 and thanked teammates for “the bonds I have created along my journey.” He added that “playing football at the highest level in the NFL has been my lifelong dream.”

Toney, a 6-foot senior from Mobile, Alabama, thanked his family and both coaching staffs for helping him during his time in Gainesville. He said, “I cannot imagine another program better preparing me for the next step in my career.”

Grimes and Toney already accepted invitations to play in the Senior Bowl in Mobile, another chance to impress NFL executives. They also are expected to attend the NFL combine in Indianapolis.

Grimes had 38 receptions for 589 yards and nine touchdowns this season. He finished his college career with 100 catches for 1,464 yards and 13 touchdowns.

Toney was at his best this season, finishing with 70 catches for 984 yards and 10 touchdowns. He also ran 19 times for 161 yards and a score. He ended his college career with 1,590 yards receiving, 715 yards rushing and 16 total touchdowns.

Pitts is expected to be a top-15 draft pick, and Grimes and Toney also could go in the early rounds.

Grimes has a rare combination of size, speed and body control, and he probably would have had better numbers had Florida not had a deep group of pass catchers that included Pitts and Toney this season and Van Jefferson, Tyrie Cleveland, Freddie Swain, Josh Hammond, Pitts and Toney in 2019.

Toney might not be quite as fast as Grimes, but he's one of the shiftiest players in the country.

By John Coon 10 hrs ago
By Pete Iacobelli 12 hrs ago
By Dave Campbell 16 hrs ago
By Anne M. Peterson 17 hrs ago
By Stephen Hawkins 18 hrs ago