No. 2 Alabama could clinch title shot versus No. 21 Arkansas 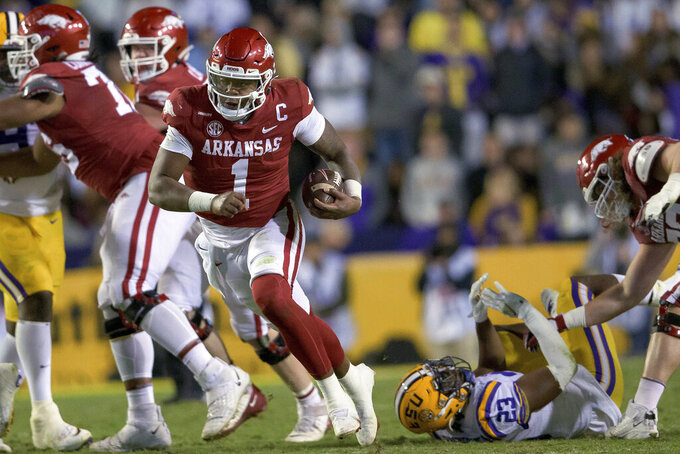 Line: Alabama by 21 1/2, according to FanDuel Sportsbook.

Alabama can secure a spot in the SEC championship game against No. 1 Georgia with a victory and give its playoff case another boost. The Razorbacks would love to snap a 14-game losing streak against the Crimson Tide and offer even more evidence of their turnaround under second-year coach Sam Pittman.

Alabama's stingy run defense against Arkansas's potent running game. The Razorbacks have the nation's No. 6 rushing offense, averaging 233.5 yards per game. The Tide are allowing only an average of 81.5 yards on the ground, ranking third nationally and led by defensive lineman Phidarian Mathis and linebacker Will Anderson Jr.. Arkansas has four players with at least 456 rushing yards, including Trelon Smith (513) , quarterback K.J. Jefferson (474), Dominique Johnson (456, six touchdowns) and Raheim Sanders (460).

Arkansas: Jefferson has been the guy that makes the Razorbacks' offense go, running and passing. The 6-foot-3, 245-pounder has passed for 1,990 yards and 17 touchdowns with three interceptions. Jefferson, who completed just 1 of 6 passes in last season's game off the bench, has also run for five touchdowns.

Alabama: WR Jameson Williams has been one of the top deep threats in college football and a huge difference maker for the Tide offense. The Ohio State transfer has 1,028 yards and 10 touchdowns. That includes eight catches of 50-plus yards, seven of them going for scores.