No. 2 Alabama set to host Vanderbilt in SEC opener 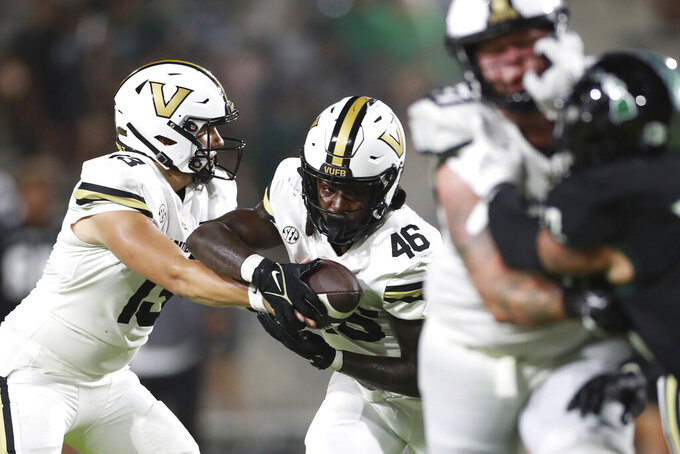 Vanderbilt quarterback AJ Swann (13) hands the ball off to Vanderbilt running back Chase Gillespie (46) during the second half of a NCAA college football game against Hawaii, Saturday, Aug. 27, 2022, in Honolulu. (AP Photo/Marco Garcia)

Line: Alabama by 40 1/2 according to Fanduel Sportsbook.

The Commodores, who have already topped the win total from Clark Lea's first season, are trying to snap a 22-game losing streak to Alabama and a 21-game skid against league opponents. The Crimson Tide want to emerge unscathed and healthy heading into a brutal stretch of games with No. 10 Arkansas, No. 23 Texas A&M and No. 11 Tennessee.

Vanderbilt: Swann. He became only the second SEC true freshman to throw for at least four touchdowns in their first career start. He also became only the third Vanderbilt quarterback to throw for at least 250 yards and four TDs on the road since 1996. Swann leads the SEC in passing efficiency at 188.6, putting him second among freshman quarterbacks in the Bowl Subdivision.

Alabama: WR Traeshon Holden. He didn't get as much attention in the offseason as other Alabama receivers, but Holden has been Bryce Young's most reliable target at the position. He leads the team with 169 yards and three touchdowns. His 12 catches trails only tailback Jahmyr Gibbs on the team.

It's the first meeting between the two teams since a 59-0 Alabama win in 2017. The Commodores are playing at Bryant-Denny Stadium for the first time since 2011. ... The Tide are 14-1 in SEC home openers under Nick Saban with an average margin of 21 points a game. ... Vanderbilt is 2-0 on the road this season and is one of only five FBS teams with two road wins already. ... Vanderbilt has scored on all 17 trips inside the opponent’s 20 and ranks fifth in the FBS for conversion percentage with 15 TDs.