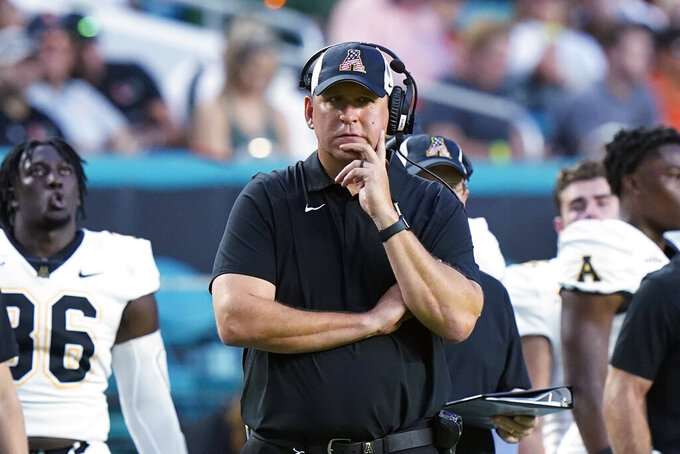 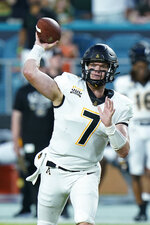 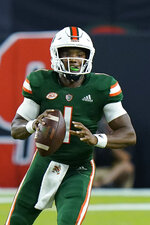 MIAMI GARDENS, Fla. (AP) — A cat survived a scare. So did the Miami Hurricanes.

D’Eriq King threw for 200 yards and rushed for 67 more, freshman Andy Borregales kicked a go-ahead 43-yard field goal with 2:04 remaining and No. 22 Miami rallied from a halftime deficit to beat Appalachian State 25-23 on Saturday night.

Cam’Ron Harris rushed for 91 yards and a touchdown for Miami (1-1), and Don Chaney Jr. had a rushing score before leaving in the first half with a leg injury. King led a 10-play, 55-yard drive in the fourth that set up Borregales for what became the winning points.

“Obviously, we're going to be happy," Harris said. “I'm not satisfied with the win, but that was a great team that we played."

And the Mountaineers — who still get talked about for their stunning win at Michigan in 2007 — put a big scare into Miami.

Jalen Virgil had a 100-yard kickoff return for a touchdown and Camerun Peoples had 95 rushing yards and a score for the Mountaineers (1-1), who took a 23-22 lead with 5:48 left when Malik Williams caught a 3-yard touchdown pass from Chase Brice.

But Appalachian State’s last chance stalled near midfield, and Miami got the ball back with 55 seconds left and ran out the clock.

“Our players took them down to the wire," Appalachian State coach Shawn Clark said. “It’s a gut-wrenching loss."

Brice completed 21 of 34 passes for 199 yards with a touchdown and an interception.

The catch that some in the crowd won’t forget anytime soon wasn’t on the field — and didn’t even involve a football.

A cat somehow got into Hard Rock Stadium and ended up dangling from the facade of the upper deck, hanging on with its front paws before eventually falling. The cat was caught by fans who unfurled an American flag to serve as a makeshift net. The cat did not appear to be injured and was eventually taken away by stadium staff.

A safety on a botched punt — two points that proved big — helped Miami take a 9-7 lead after the first quarter, but Virgil's kickoff return helped stake the Mountaineers to a 14-12 edge going into halftime.

The lead changed three times in the second half, the last of those on Borregales' kick that helped Miami escape.

“It’s a good step in the right direction,” Borregales said.

Miami: Injuries took a toll on the Hurricanes throughout the game and Diaz said postgame that the initial diagnosis for both Chaney and LB Keontra Smith was not good. Chaney was ruled out with what appeared to be an injury to his right leg almost immediately after entering the evaluation tent. He returned to the Miami sideline in the second half, aided by crutches and with a brace on his leg. Smith was lost as well in the first half, also with a lower extremity injury. Both will be evaluated again Sunday.

Miami will likely remain in the AP Top 25, though a two-point win at home over an unranked opponent should mean the Hurricanes won’t move up far in the rankings.