No. 5 Buckeyes cruising again as No. 20 Penn St visits 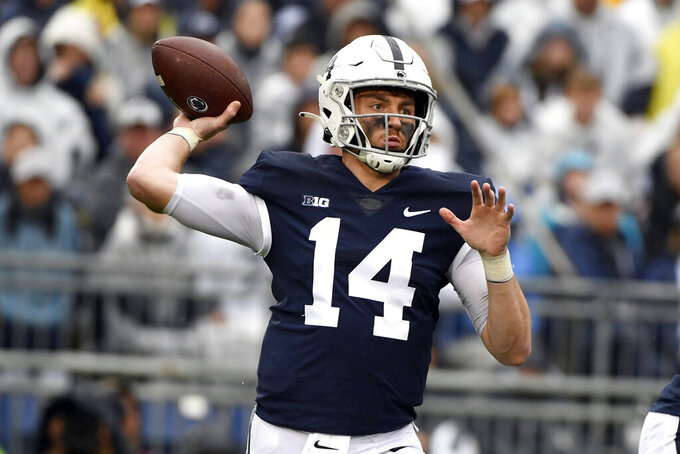 Line: Ohio State by 18 ½, according to FanDuel Sportsbook.

Some of the luster was taken off this matchup when Penn State lost an extraordinary nine-overtime game to Big Ten bottom-dweller Illinois. That dropped the Nittany Lions from No. 7 to No. 20. Meanwhile, the No. 5 Buckeyes just keep building momentum after climbing the polls again following a Week 2 upset by Oregon. Knocking off Ohio State at home would be a monumental rebound for 18 1/2-point underdog Penn State and likely push the Buckeyes out of playoff contention.

Ohio State: Besides the Ohio State air show, the story has been true freshman RB TreVeyon Henderson. His carries have been limited because he's been spelled in the second half of Buckeyes blowouts. Still he rushed for 81 yards on nine carries last week with two touchdowns, and also caught a pass for a score. His 8.8 yards per carry is the best in the nation.

Penn State: QB Sean Clifford's mobility was limited by an injury last week, but coach James Franklin says he will be 100% for Saturday.

Three of the last five meetings between the teams have been decided by three or fewer points. ... The Buckeyes have won the last four meetings, including 38-25 in 2020. ... The game will feature the Big Ten’s best red-zone defense (Penn State) against the conference's best red-zone offense (Ohio State). ... Ohio State has won five straight overall and 25 in a row against conference opponents including their Big Ten championship game victories. ... The Buckeyes have won an FBS-leading 12 consecutive true road games and a conference-record 11 straight road games against league foes by double digits. ... Stroud's passer rating of 192.8 is second in the nation to Coastal Carolina's Grayson McCall. ... Penn State has forced a turnover in 13-straight games dating to last season.