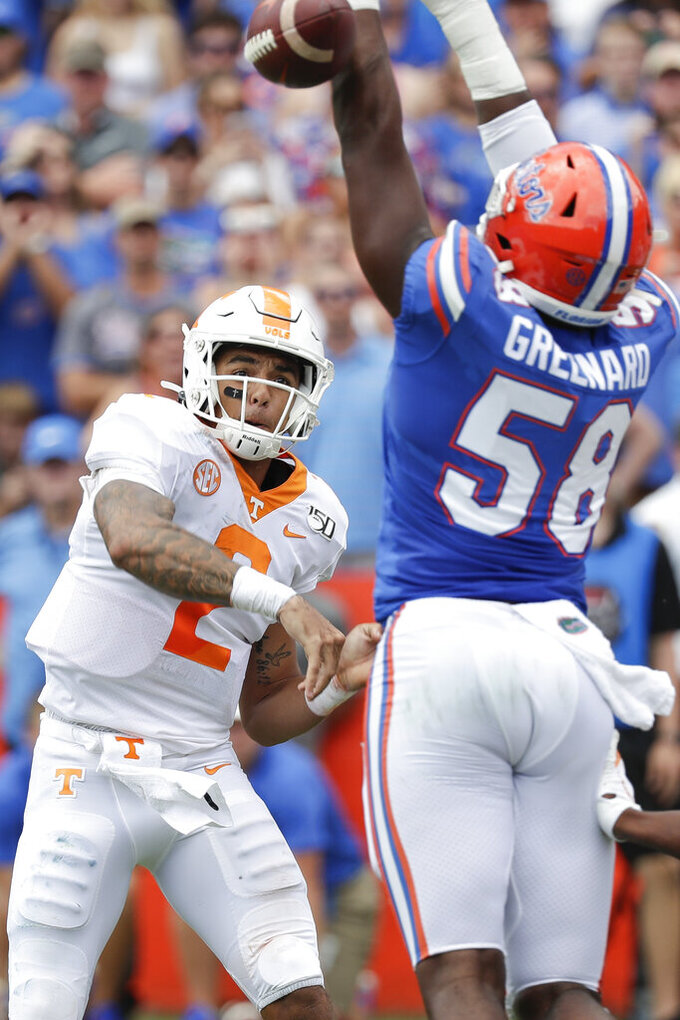 GAINESVILLE, Fla. (AP) — Florida coach Dan Mullen had some advice for Kyle Trask before the junior quarterback made his first collegiate start.

Mullen told Trask to relax and have fun. Then Mullen offered one more tidbit.

"If you're really nervous, we can fix the nervous problem," Mullen told Trask. "Go out there and throw a bunch of picks and play terrible and you won't have to be nervous - you won't play no more. We'll fix that problem."

Trask chuckled, then stepped onto the field and showed he belonged.

Trask threw for 293 yards and two touchdowns in his first start in nearly seven years and No. 9 Florida beat slumping Tennessee 34-3 Saturday, extending the Gators' dominance in a series that used to be the most prominent in the Southeastern Conference's Eastern Division.

Trask's first start at Florida was far from perfect, though. He lost a fumble and threw two interceptions against the Volunteers (1-3, 0-1 SEC).

But he overcame those miscues and led Florida (4-0, 2-0) to its 14th win in its last 15 games against Tennessee. Trask completed 20 of 28 passes, none better than the ones that went for touchdowns to Kyle Pitts and Freddie Swain.

Trask connected with Pitts for a 19-yard score on the opening drive of the game. He found Swain for a 29-yarder to cap Florida's first possession of the second half.

Not bad for a backup.

"It's pretty surreal," Trask said. "I've been waiting for my number to get called. I knew I was going to be ready when my time, my number was called."

Trask played behind current Houston starter D'Eriq King at Manvel (Texas) High for three seasons and spent the last three years behind Feleipe Franks, who gruesomely dislocated and fractured his right ankle in a 29-21 victory at Kentucky last weekend. Trask took over for an injured Franks last week and rallied Florida from a 21-10 deficit.

His last start was in 2012 for Manvel's freshman A team.

Tennessee had an interesting day. It was mostly a debacle as Tennessee scored its fewest points against Florida since losing 31-0 to the Gators in 1994.

Right tackle K'Rojhn Calbert was flagged for a late hit on the Vols' opening series. Cornerback Warren Burrell recovered a fumble with a foot out of bounds, negating the turnover.

Jauan Jennings, the team's top receiver, bobbled a would-be touchdown in the end zone that resulted in an interception. Tennessee had to burn a timeout after coming out of a television break. And quarterback Jarrett Guarantano threw an interception right to cornerback Marco Wilson after a miscommunication with a receiver.

Guarantano completed 8 of 15 passes for 93 yards with two interceptions and a sack in the first half. He was benched in favor of freshman Brian Maurer to start the second half.

"We're not good enough to beat a good team if we don't play mistake free," Tennessee coach Jeremy Pruitt said. "We can't give them stuff, and we did that today."

Tennessee: The Vols might have a quarterback quandary moving forward. Maurer, who grew up in nearby Ocala, played three series before Guarantano returned. Maurer completed 4 of 11 passes for 44 yards with an interception. Guarantano finished 10 of 17 for 104 yards with two interceptions.

Florida: The Gators turned in their most complete game of the season. They needed a couple of defensive stands to beat Miami in the opener and leaned on Trask to come from behind at Kentucky.

Florida defensive end Jon Greenard was the best player on the field. The Louisville transfer finished with four tackles, including two for losses, and had three pass breakups and a forced fumble. One of his deflections prevented a touchdown.

"I might be a DB or something now," Greenard said. "Coach might need to make a couple plays and adjustments for me."

Tennessee left tackle Wanya Morris injured his right ankle in the third quarter. ... Florida linebacker Ventrell Miller left the game in the first half with what appeared to be a right shoulder injury.

Florida played without two of its top defenders: cornerback CJ Henderson and pass-rusher Jabari Zuniga. Both have ankle injuries. Throw in receiver Kadarius Toney (shoulder) missing his second straight game and safety Donovan Stiner being suspended for the first half, and the Gators were down four starters at kickoff.

The Gators should remain in the top 10 after a dominating performance.

Tennessee has a bye week before beginning a daunting stretch against No. 3 Georgia, Mississippi State and at second-ranked Alabama.

Florida hosts Towson in the second of two games against teams from the Football Championship Subdivision.