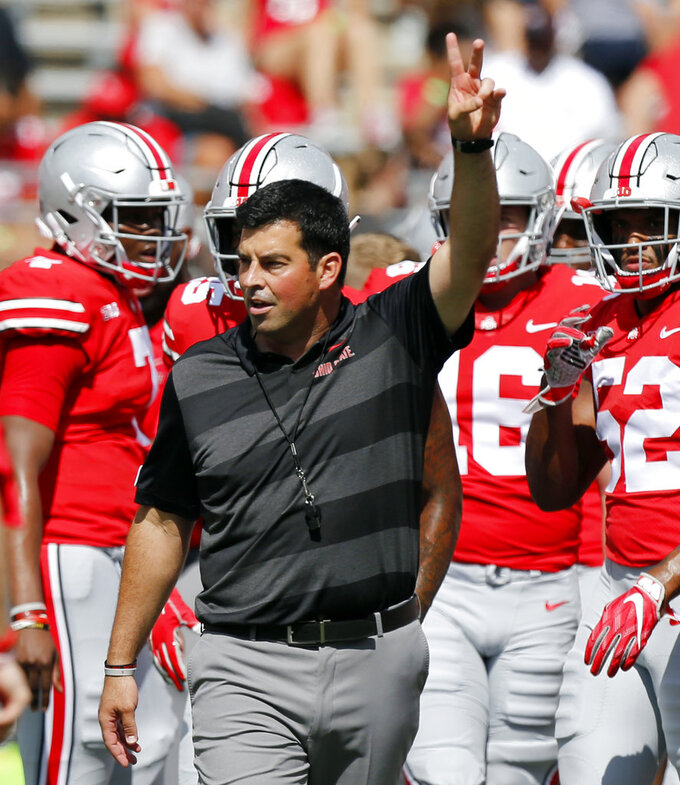 FILE - In this Saturday, Sept. 1, 2018, file photo, Ohio State's acting head coach Ryan Day directs warm-ups before an NCAA college football game against Oregon State in Columbus, Ohio. No. 15 TCU gets another chance for the Big 12 against No. 4 Ohio State. The Horned Frogs and Buckeyes will play Saturday night at the home stadium of the NFL’s Dallas Cowboys. (AP Photo/Jay LaPrete, File)

That's the amount of the lump-sum bonus the university will give Day for acting as head coach from Aug. 1 through last Sunday. Meyer served a three-game suspension for mismanagement of former assistant Zach Smith.

Day was informed of the bonus in a letter dated Monday from athletic director Gene Smith. It will be paid Sept. 30.

Day makes $1 million this year as co-offensive coordinator and quarterbacks coach. The No. 4 Buckeyes were 3-0 in the games Day coached, including Saturday's 40-28 win over then-No. 15 TCU.

Smith was accused of domestic violence and other behavior.