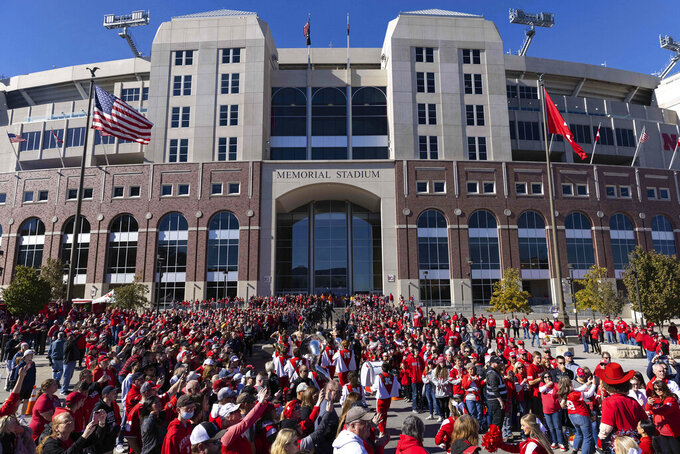 FILE - Nebraska fans cheer as the marching band leads the team's arrival at Memorial Stadium before an NCAA college football game against Purdue, Saturday, Oct. 30, 2021, in Lincoln, Neb. A survey of more than 20,000 Nebraska fans showed nearly three-fourths want or would have no problem with alcohol sales in Memorial Stadium. More than half would be OK with sports wagering on site if it becomes legal someday. (AP Photo/Rebecca S. Gratz, File)

A survey of more than 20,000 Nebraska fans showed nearly three-fourths want or would have no problem with alcohol sales in Memorial Stadium, and more than half would be OK with sports wagering on site.

University regents voted last month to allow campus leaders to decide whether to sell alcohol at sports venues. University president Ted Carter said there would be no alcohol sales at Memorial Stadium in 2022, but beer was available at Pinnacle Bank Arena for the Big Ten wrestling tournament this past weekend.

At least half the schools in the major conferences, and eight of the 14 in the Big Ten, now sell alcohol.

Nebraska survey respondents attended an average of 3.7 home football games per year, and 51% were between the ages of 35 and 64.

Some 72% of all respondents said they had a positive or neutral attitude toward alcohol sales at Memorial Stadium, including 41% that had a very positive attitude.

Nebraska voters last fall legalized casino gambling — including sports wagering — but only at the state's six horse tracks. The Nebraska State Racing Commission, which will oversee casino and sports gambling, is still formulating policies and no date set is set for legal gambling to begin.

Also, there has been no movement to allow sports wagering at locations other than horse tracks.

The NCAA did not immediately respond to a request for comment about its position on sportsbooks in college stadiums. NCAA bylaws forbid athletes, athletic department staff, those who have responsibilities in or over an athletic department and conference staff from wagering activities.