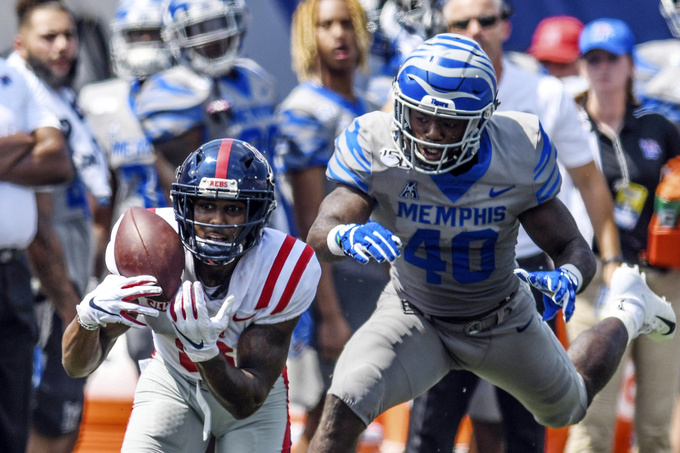 On Saturday, the roles were reversed with a much-improved Memphis defense stifling Mississippi, leading the Tigers to a 15-10 victory in the season opener for both teams.

The Tigers held the Rebels to 173 yards of offense, including minus-1 yards rushing in the first half. But it was a fourth quarter safety by Memphis defensive end Bryce Huff that sealed it. On first down after Tiger punter Adam Williams pinned the Rebels at their own 2, Huff busted through to tackle Corral as he dropped back to pass in the end zone.

That gave Memphis its final 15-10 margin with 6:32 left. The Rebels would never get the ball back after the ensuing free kick and Memphis ran out the clock with a six-plus-minute drive.

"That's something I'll remember for a long time," Norvell said of closing out the game. "This football team trains, prepares itself. This team plays a top-notch, physical football game here in Memphis."

Patrick Taylor rushed for 128 yards and a touchdown to lead the Memphis offense. Kenneth Gainwell, who has taken over the Tigers all-purpose duties from Tony Pollard, now with the Dallas Cowboys, had 77 yards rushing for the Tigers and six catches for another 41 yards.

Corral finished the game 9 of 19 for 93 yards passing. Scottie Phillips managed 62 yards on 19 carries as the Rebels were held to 173 yards of total offense.

"We struggled to block them," Rebel coach Matt Luke said.

That was an important factor for the Tigers, according to Norvell.

"We knew coming into it that whoever would be able to establish the running game would put themselves in a position to be successful," Norvell said. "You look at it, we rushed for almost 200 yards, they only rushed for 80. That was a big part of the game."

"At times, early on, there were a couple of bad decisions," Luke said of the first half offense. "We stayed behind the chains. Couldn't get anything going. In the second half, we limited the negative plays a little bit more."

Ole Miss: The new offense under Rodriguez failed to muster any real momentum. In addition to recording only 173 yards, neither Corral's passing nor Phillips' rushing was productive. The Rebels started 0-7 on third-down plays and only managed one conversion in the game.

Memphis: Although the Memphis offense wasn't as explosive as last year, and was hindered by at least a half-dozen false-start penalties, the Tigers did manage to convert 3 of 5 fourth-down plays. That included one with about three minutes left on the game's final drive.

Huff said when he went onto the field with the Rebels on their own 2, thoughts of a safety crossed his mind. But he wanted to make sure he was careful, especially since a run seemed evident in that situation.

"I was thinking: 'I've got to make something happen,'" Huff said of the play, later adding: "I didn't necessarily think he was going to do a pass play down there."

With Corral dropping back, Huff reached the Rebels quarterback near the back of the end zone.

"I kinda blanked," Huff said of the post-safety celebration.

Luke added: "Getting backed up and giving up a safety, you've got a chance to drive down and win the football fame right there, or at least flip field position at worst."

It remains to be seen whether the win over an SEC team will be enough to move the Tigers into the Top 25. They were among others receiving votes in the preseason poll, and are considered to be one of - if not the - top teams in the American Athletic Conference.

Ole Miss: Entertains Arkansas at Oxford on Saturday in its SEC opener.