TCU promises to be ready for either Purdue quarterback 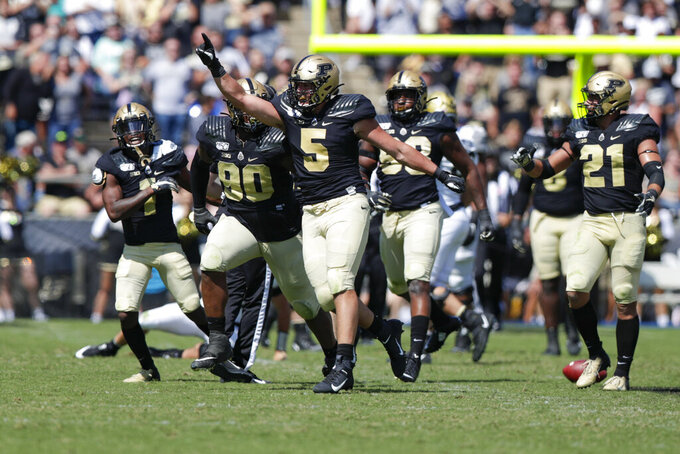 It's the reason he scheduled Ohio State, LSU and Arkansas in previous seasons and it's why the Horned Frogs are heading to Purdue on Saturday.

This weekend, though, could turn out to be more complicated than Patterson expected as Boilermakers quarterback Elijah Sindelar tries to work his way back from a concussion suffered last weekend.

"Hopefully, the quarterback is OK. You always want to play the best," Patterson said. "That's why you schedule the games."

Purdue coach Jeff Brohm hasn't provided many hints about Sindelar's status since announcing the injury Monday. Sindelar did not practice Tuesday but was on the field Wednesday during the portion open to the media. On Wednesday night, Brohm told radio listeners he was "optimistic" Sindelar, the national leader in yards passing, would play.

If he can't go, the Boilermakers (1-1) would likely turn to Jack Plummer, a redshirt freshman who has not yet taken a snap in college.

The uncertainty forced Patterson and TCU's defensive staff to dig deep into the film vault to prepare.

The good news: TCU (1-0) had some extra time to get ready after taking last week off and has some experience working against two quarterbacks — its own.

Max Duggan and Alex Delton split the workload in a season-opening blowout over Arkansas-Pine Bluff and that poses a different kind of obstacle for the Boilermakers.

Defending TCU becomes even harder for Purdue, which will be without its top two defenders Saturday. Defensive tackle Lorenzo Neal was ruled out by Brohm as he continues to recover from knee surgery and Wednesday linebacker Markus Bailey went down in practice with a season-ending knee injury. Brohm said it was a non-contact injury and would require surgery. Through two games, Bailey had 14 tackles, second on the team. He is a fifth-year senior and a captain.

Purdue's Rondale Moore and TCU's Jalen Reagor could produce one of the most entertaining games of the weekend. The two game-breaking receivers possess similar skills, similar styles and helped their defenses get ready for one another this week. Reagor, a second-team all-conference selection and TCU's MVP last season, fumbled a punt and caught only five passes for 71 yards in the season-opener. Moore, a first-team All-American last season, already has 24 catches for 344 yards and three scores in two games.

One of the Horned Frogs' trademark features is a suffocating defense that pressures quarterbacks. But in Week 1, TCU only posted two sacks.

"There are three ways you get sacks," Patterson said. "Either you have the people with the ability with people to do it themselves, you have to do it within the scheme or you have to manufacture them. That's what I told them. If you guys don't want me twisting you and doing all these different things, then what you have to do is you have to show me that you can run by people on your own."

Moore's presence has helped the Boilermakers stretch the field and they've taken advantage. Purdue leads the nation with 19 passing plays of 20 or more yards this season.