Thompson-Robinson, No. 18 UCLA hurdling over expectations 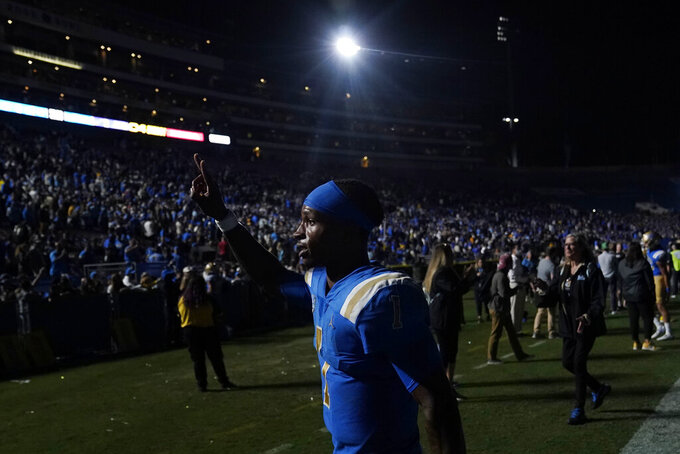 UCLA quarterback Dorian Thompson-Robinson (1) walks off the field after a 40-32 win over Washington during the second half of an NCAA college football game Friday, Sept. 30, 2022, in Pasadena, Calif. (AP Photo/Marcio Jose Sanchez)

LOS ANGELES (AP) — Dorian Thompson-Robinson has been answering questions about his play and UCLA's turnaround in the same fashion as he deals with opposing defenders.

By hurdling over them.

The fifth-year senior quarterback and the Bruins both made huge statements about respect with a 40-32 victory Friday over No. 15 Washington. While the win vaulted UCLA into the rankings at number 18, more hurdles remain. The next one comes Saturday when No. 11 Utah comes to the Rose Bowl in the biggest game on this week's Pac-12 schedule.

UCLA is 5-0 overall and 2-0 in the Pac-12 for the first time since 2013 and has an eight-game winning streak dating to last season. While the Bruins are rolling, Thompson-Robinson also realizes that respect and success can be fleeting, especially in early October.

Thompson-Robinson surprised many by returning for a fifth season in Westwood. Coach Chip Kelly even suggested last year it was time for Thompson-Robinson to turn his attention toward the NFL draft because of what he accomplished.

“He’s a byproduct of his experience. Whether he’s a freshman or a fifth-year kid there’s always learning opportunities for him. And he takes advantage of that,” Kelly said.

For Thompson-Robinson, though, there was still more developing to do, both on the field and as a leader. There was also making sure the team continued its progress under Kelly after a rough start to his tenure.

UCLA went 10-21 over its first three years under Kelly, but is 13-4 since the start of last season. During the Bruins' eight-game winning streak, they have scored at least 40 points six times and had an average winning margin of 23 points.

Thompson-Robinson has thrown for 1,981 yards with 18 touchdowns and four interceptions over the past eight games He has also run 64 times for 463 yards and six touchdowns.

Going into Saturday's game, he is fourth in the nation in completion percentage (74.3%) and 12th in passing efficiency (171.4). It will be Thompson-Robinson's 41st start at UCLA, just four away from surpassing Cade McNown for the most by a Bruins quarterback.

“He’s playing his best football right now, from my vantage point. Not that he wasn’t good before, but he’s really taken his game to another level," Utah coach Kyle Whittingham said. “Seems to be very poised. Makes plays, takes care of the ball, and he’s a dual-threat, which is the biggest issue for us is his ability to run as well as throw the football.”

Against Washington, Thompson-Robinson had his finest all-around game at UCLA. He accounted for four touchdowns, including three passing, and threw for 315 yards. But it was a pair of runs that generated the most highlights. He hurdled over Huskies safety Kamren Fabiculanan during a 10-yard scramble in the second quarter. On the opening drive of the second half, he sidestepped defenders Bralen Trice and Jayvion Green, causing them to fall on one another in a heap, on a 2-yard TD run that energized the crowd and teammates.

“I think I’m very aware of what I bring to the table, I’m just trying to help the team win," Thompson-Robinson said.

Kelly would love to see Thompson-Robinson do the sidestep a couple more times, but he is hoping his quarterback tries to avoid hurdling opponents. Kelly also knows one of the worst things a coach can do is take away a player's instinct for making plays.

“He has to know his best ability is availability, and we need to keep him on the field, so he’s gotta be conscious of that. You do see him sliding a little bit more and taking less unnecessary hits,” Kelly said. “He's an elusive runner. On the TD run, he could have lowered his shoulder and tried to get across the goal line, but we always like it better when he's not taking a hit."

Besides being quicker getting the ball out of the pocket, Thompson-Robinson has trusted his legs more and scrambled when opportunities were there.

Much like the Washington game was a chance for Thompson-Robinson to avenge a loss from four years ago, he has had Utah (4-1, 2-0) circled on his calendar since the schedule was announced. The Bruins have lost the last five to the defending Pac-12 champs by an average of 27 points.

Thompson-Robinson did not play in last year's game due to an ankle injury but still has memories of the 2019 game, when he was sacked five times and threw two interceptions in a 49-3 loss.

"I still have a bad taste in my mouth from that game,” he said. “We've got our work cut out for us. We are giving them all the respect they deserve because they've earned it.”