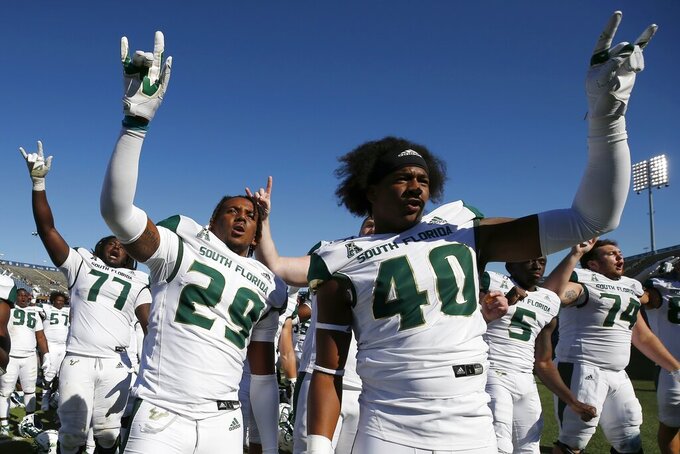 STORRS, Conn. (AP) — Jordan McCloud passed for three touchdowns and ran for another and South Florida rolled past Connecticut 48-22 on Saturday, the Bulls' eighth straight victory over the Huskies.

After a three-and-out on their first possession, the Bulls (2-3, 1-1 American) scored touchdowns on their next four, beginning with McCloud's 12-yard pass to Bryce Miller with 3:22 left in the first quarter.

McCloud threw a 13-yard score to Randall St. Felix and ran 26 yards for another with under two minutes left in the half as USF went in front 27-14. McCloud had 136 yards passing with two touchdowns and 51 yards rushing and a score by halftime.

A 12-yard TD pass to Miller made it 34-14 in the third before place-kicker Spencer Schrader took a fake field-goal attempt 22 yards for a touchdown and a 41-14 lead in the fourth.

McCloud finished 11-of-21 passing for 157 yards but was intercepted twice. Two of his TD passes went to Miller.

Jordan Cronkite rushed for 148 yards on 20 carries, his sixth career 100-yard game. USF piled up 313 yards on the ground and outgained UConn 503-293 in total yards. The defense had five sacks and 10 tackles for loss.