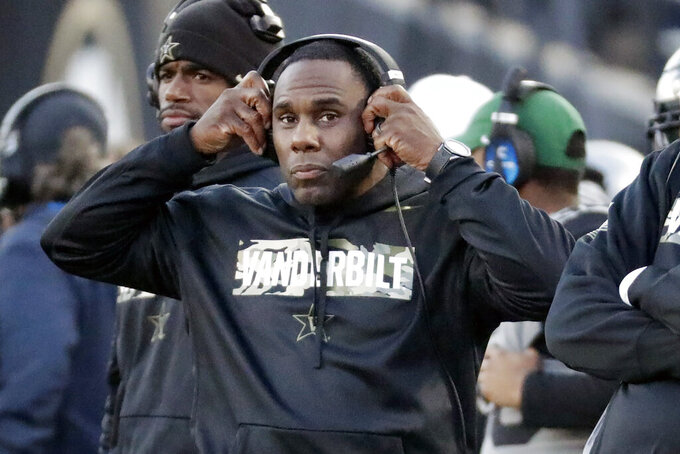 NASHVILLE, Tenn. (AP) — Vanderbilt athletic director Malcolm Turner says Derek Mason has his full support as the Commodores coach and they’ll be working together to give the football program the resources and support needed to succeed.

“I want to make it very clear that Derek Mason will be our head football coach moving forward,” Turner said. “Coach Mason has my full support and I am committed to working with him to ensure our football program has the necessary resources and support to succeed.”

Turner said Vanderbilt currently is developing a new plan for athletics to help football and all of the varsity sports compete on and off the field, which is expected to be announced in 2020. Vanderbilt last renovated its football stadium in 1981, though Turner oversaw upgrades of the stadium’s bathrooms and a new video board this offseason.

The university’s last major improvement of athletic facilities started in 2008.

“Coach Mason is committed to leading Vanderbilt’s football program the right way, and we will move forward in that spirit together,” Turner said.

Mason currently is 26-46 and sixth on Vanderbilt’s all-time wins list. He signed a contract extension after last season, which was announced in February, after coaching the Commodores to their second bowl during his tenure. Mason has yet to post a winning record at the Southeastern Conference’s smallest and only private university.

The coach thanked Turner for his statement on his job security at his weekly news conference.

“I definitely appreciate the support of Malcolm Turner and this university,” Mason said. “When you look at where we are, that’s not where we want to be. The standard is higher. We understand that. We’re going to continue to work and grind.”

Asked what resources Vanderbilt has lacked to compete in the SEC, Mason said Turner has looked at other programs to see how the Commodores’ facilities stack up. Mason mentioned recruiting and that he met with Turner earlier this season to talk about what Vanderbilt needs.

“He’s tried to be insightful about what he sees and for him, our conversations have been short but very, very specific about making sure we try to figure out what’s our best Vanderbilt and moving forward,” Mason said.