Washington St has won 4 straight in the series with Oregon 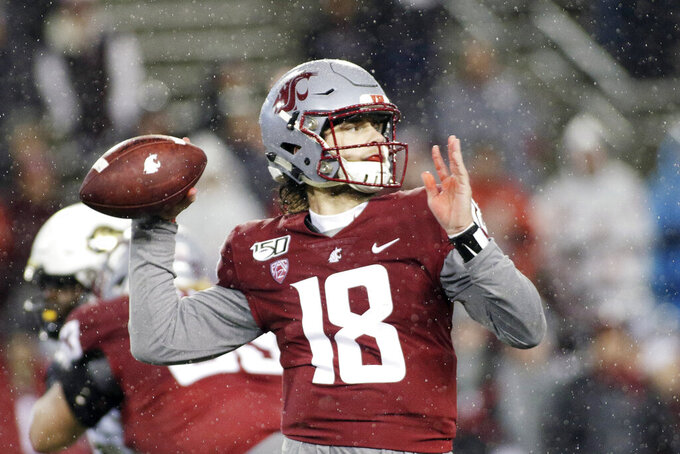 EUGENE, Ore. (AP) — The Oregon Ducks are well aware of their recent history against Washington State.

The Cougars (4-3-1-3 Pac-12) have a four-game winning streak in the series that resume Saturday in Eugene.

The No. 11 Ducks (6-1, 4-0) got locked in on Washington State as they walked off the field in Seattle last Saturday following a 35-31 comeback win over Washington.

"We like to start it on the march back to the locker room after a game, particularly a victory, to get refocused. I mean, when you're in conference play like this, every week is a playoff game. Everybody is alive, everybody has a chance at the championship," Oregon coach Mario Cristobal said.

The Ducks have won six straight games since their season-opening loss to Auburn with this mentality. They sit atop the Pac-12 North standings and are on track for a spot in the Pac-12 championship. Win there, and who knows? The first College Football Playoff rankings come out on Nov. 5.

Washington State got tripped up at the start of Pac-12 play with three straight losses but rebounded last weekend with a decisive 41-10 victory at home over Colorado.

Coach Mike Leach said he's not sure why the Cougars have had a run of success against the Ducks. It's the longest winning streak over Oregon by a Pac-12 opponent since Washington won five straight from 1989-93.

The Cougars have never won five straight against Oregon.

Other things to note Saturday night when the Cougs visit the Ducks, including dueling high-profile quarterbacks:

FIRST OFF, HERBERT: Senior Justin Herbert has thrown a touchdown pass in 35 straight games, the longest active streak in the nation, and the Ducks average an impressive 44.5 points per game when he starts at Autzen Stadium. Among his favorite targets is Jaylon Redd, who has seven touchdown receptions this season, and one scoring run.

Herbert threw for 280 yards and four touchdowns last week in the victory over the Huskies to earn Pac-12 Offensive Player of the Week honors.

ON THE OTHER SIDE, GORDON: Washington State quarterback Anthony Gordon leads the nation in passing yards per game (425.9) and completions per game (35.14), as well as total offense with 431.1 yards a game and total passing yards with 2,981.

Gordon has 29 touchdowns this season, including the four he threw against the Buffaloes.

Leach was asked this week about his opinion on Herbert, and he wound up complimenting Gordon: "I think he's a talented guy, but I'm very pleased we have ours instead."

TRANSFER PORTAL: Mario Cristobal wished senior wide receiver Brenden Schooler well after he entered the transfer portal on Tuesday. "We support him and his choice," the coach said. Schooler missed the first four games of the season after injuring his foot in August. He had two catches for 44 yards this season. The move was a blow to the Ducks, who also lost senior tight end Jacob Breeland to a season-ending injury last week.

WAIT, WHAT? Leach enjoys playing at Autzen Stadium. The way he describes that is, well, unique.

"Most people have it have it as the loudest in their conference; I would agree with that. Also, I like it because it's got such a unique atmosphere. On the outside it looks like it's Middle Earth; it's got waterfalls going and all that other stuff and then inside the stadium you got, as far as all the uniforms and their facilities, their players and coaches, it's got this real urban vibe. Then you go in the stadium and folks will have all their hunting gear on and they'll have just come out of a duck blind or a deer stand or something like that and going to catch a little football," he said at his Monday press conference.