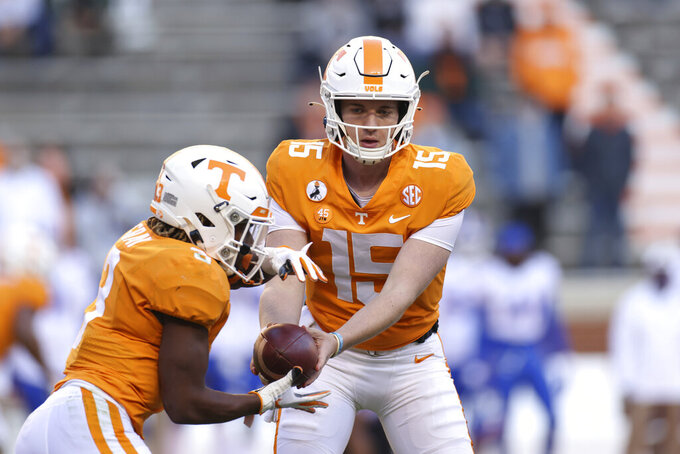 Tennessee quarterback Harrison Bailey (15) hands the ball off to running back Eric Gray (3) during the first half of the team's NCAA college football game against Florida on Saturday, Dec. 5, 2020, in Knoxville, Tenn. (Randy Sartin/Knoxville News Sentinel via AP, Pool)

West Virginia: Junior running back Leddie Brown ranks second in the Big 12 in rushing yards per game (105.0) and third in rushing touchdowns (nine). His 945 yards rushing are more than the entire team had last season. Senior Darius Stills, the conference’s defensive lineman of the year, has 7 1/2 tackles for loss, 3 1/2 sacks and an interception.

Tennessee: Sophomore RB Eric Gray ranks fourth in the SEC with 772 yards rushing and has a team-leading six touchdowns (four rushing, two receiving). LBs Deandre Johnson and Kivon Bennett have five sacks apiece (tied for fifth in the SEC). Johnson has two forced fumbles and Bennett has one fumble recovery.

West Virginia: Linebacker Tony Fields, the Big 12′s leading tackler, announced earlier this month he will skip the Mountaineers’ bowl game to focus on his preparations for the NFL draft. But safety Scottie Young, who arrived at West Virginia in August, announced Sunday on Twitter that the NCAA will allow him to play in the bowl. Both Fields and Young transferred this season from Arizona.

Tennessee: The Volunteers lost seven of their last eight games after opening the season with wins against South Carolina and Missouri. Gray was named Tennessee's Mr. Football three times while starring at Lausanne Collegiate School in Memphis.

West Virginia beat the Volunteers 40-14 in the only other matchup between the teams, spoiling Jeremy Pruitt's debut as Tennessee's coach. The neutral-site game in Charlotte, North Carolina, opened the 2018 season.

Tennessee: It will be Tennessee's fourth Liberty Bowl appearance, and its first since a win over Minnesota in 1986. The Volunteers have won their last four bowl games, including a 23-22 win over Indiana in last January's Gator Bowl, which snapped a streak of three consecutive seasons without a bowl berth.