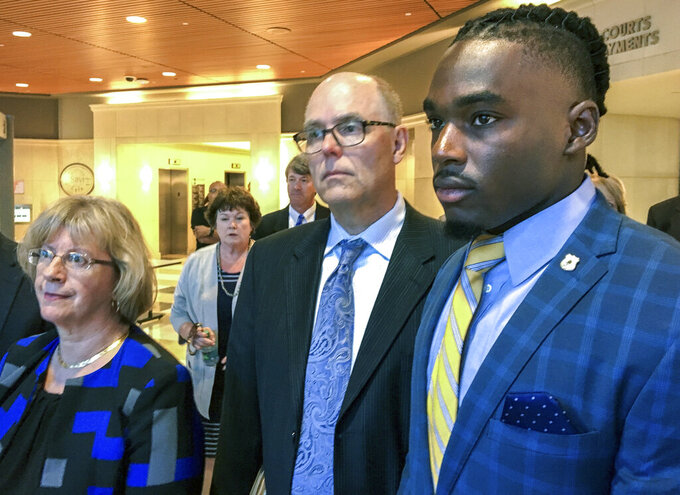 FILE - In this Aug. 23, 2018, file photo, University of Wisconsin wide receiver Quintez Cephus, right, walks with his attorneys Kathleen Stalling, left, and Stephen Meyer after appearing in court in Madison, Wis. The trial of Cephus has begun with a woman testifying that Cephus raped her in his apartment. The 21-year-old Cephus is charged with second- and third-degree sexual assault after two 18-year-old women reported to police that he had assaulted them on the same night in April 2018. Cephus argues the sex was consensual and arranged by one of the women. (Ed Treleven/Wisconsin State Journal via AP, File)

MADISON, Wis. (AP) — The trial of former University of Wisconsin football player Quintez Cephus began Tuesday with a woman testifying that Cephus raped her in his apartment.

Cephus, 21, of Macon, Georgia, is charged with second- and third-degree sexual assault after two 18-year-old women reported to police that he had assaulted them on the same night in April 2018. Both women said they were too drunk to consent.

Cephus argues the sex was consensual and arranged by one of the women. His attorneys said they will present evidence, including surveillance video from that evening, to show the women were not as intoxicated as they claim and had consented.

Cephus, a wide receiver, was suspended from the Badgers football team in August. He was expelled from the university earlier this year for violating its non-academic misconduct code.

Cephus sued the university in October, claiming his constitutional rights were violated when the school pursued a student disciplinary investigation against him because he could not defend himself during the probe into the original criminal investigation. He dropped the lawsuit in March, but his attorneys said he would likely refile it after the sexual assault trial.

During opening statements for the prosecution at Tuesday's jury trial, Assistant District Attorney Jessica Miller showed a Snapchat message sent by one of the women after she woke up to find herself, and her best friend, naked on Cephus' bed.

"My phone is going to die. I just got raped. I don't know what to do," Miller told jurors the woman wrote.

Miller said the woman and her friend had been drinking alcohol before going out to bars where they met Cephus and his roommate, Badger teammate Danny Davis. One of the women testified that she had little recollection of getting from the bar to Cephus' apartment and events after that.

The woman testified Cephus had sex with her friend even though her friend's eyes were closed and she appeared to be unconscious.

Meyer contrasted that to a statement the woman gave police, in which she said, "I wasn't walking straight. It's so obvious to everyone I was drunk. I was dying."