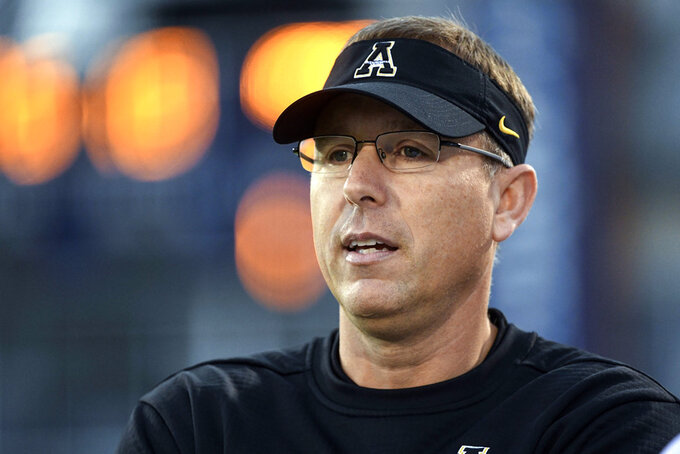 File-This Oct. 25, 2018, file photo shows Appalachian State head coach Scott Satterfield watches his team warm up before an NCAA college football game against the Georgia Southern, in Statesboro, Ga. A person with knowledge of the situation says Louisville has reached agreement with Satterfield to be the Cardinals next head football coach. The person spoke to The Associated Press Monday, Dec. 3, 2018, on condition on anonymity because neither the school nor Satterfield had publicly announced the decision. Louisville has scheduled a Tuesday afternoon news conference with a “special announcement” about the football program. (AP Photo/John Amis, File)

Louisville has tabbed Appalachian State's Scott Satterfield to be the Cardinals' next football coach.

A person with knowledge of the situation says the school has reached an agreement with Satterfield. The person spoke to The Associated Press on Monday on condition of anonymity because neither the school nor Satterfield had publicly announced the decision. Louisville has scheduled a Tuesday afternoon news conference with a "special announcement" about the program.

The 45-year-old Satterfield emerged as Louisville's next reported choice after Purdue's Jeff Brohm turned down the offer from his alma mater last week to remain with the Boilermakers. Satterfield has led the Mountaineers to a 51-24 record in six seasons, including 10-2 this year with a Sun Belt Conference championship. Appalachian State will face Middle Tennessee in the New Orleans Bowl on Dec. 15.

Satterfield will replace Bobby Petrino, who was fired on Nov. 11 after a 2-8 start. Lorenzo Ward was 0-2 as the Cardinals' interim coach.

Satterfield faces a massive task rebuilding his first Power Five program, which spiraled quickly this season after the departure of 2016 Heisman Trophy winner Lamar Jackson to the NFL.

Louisville lost its final nine games and finished 0-8 in Atlantic Coast Conference play. Its only victories were against FCS Indiana State and Western Kentucky thanks to second-half rallies.

The offensive-minded Satterfield must improve a unit that went from being one of the nation's best with Jackson to ranking 111th nationally at 352.5 yards per game. By comparison, Appalachian State ranks 20th nationally in scoring at 36.7 points per game and 42nd in total offense at 429.6 yards.

The North Carolina native played quarterback for the Mountaineers from 1991-95 and coached several offensive positions with the program before becoming head coach in 2013. Satterfield has also worked at Toledo and Florida International.

Louisville's pursuit of Brohm and then Satterfield follows athletic director Vince Tyra's preference for a coach who could put points on the board — though he said it wasn't a requirement.

"Going back as we moved through conferences," Tyra said last week, "one thing that was consistent was we scored points. I think that's been fun."

Another priority for Satterfield will be hiring a defensive coordinator to shore up a unit that allowed at least 50 points seven times this season, including a 77-16 loss to No. 2 Clemson.