Back in Miami, Nick Saban reflects on unsuccessful NFL stint 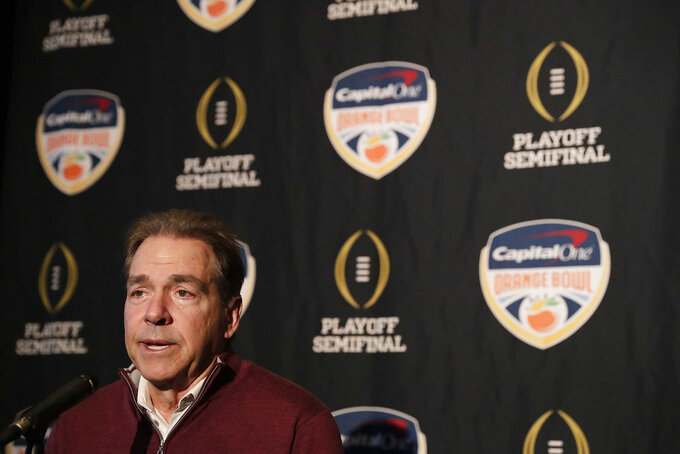 MIAMI GARDENS, Fla. (AP) — The placard at the interview table identifying Alabama's coach was unnecessary, because his gestures did the trick.

There was the familiar shoulder shrug, the palm patting the chest, the side of his hand repeatedly tapping the table as he spoke. He made air quotes, drew circles with his index finger and crossed his arms so tightly his crimson sweater seemed to turn even redder.

Nick Saban was back in town.

His No. 1-ranked Crimson Tide play Oklahoma in the Orange Bowl on Saturday for a berth in the College Football Playoff final. Saban's return to South Florida stirs memories of the most notorious busted play of his career, a two-year NFL dalliance that ended with his only losing season and a badly scripted departure.

The Alabama bowl media guide summary of Saban's year-by-year coaching record curiously excludes his stint with the Miami Dolphins, but it happened. After five seasons at Louisiana State, he went 9-7 in 2005 and 6-10 in 2006 with the Dolphins, and then left to take the Alabama job two weeks after saying he wouldn't.

"I learned from my experience coming here. I learned something about myself. At the time it was a tough consequence to have to deal with," he said Thursday at Orange Bowl media day. "I couldn't have been in a better situation with better people here in Miami. But I found out maybe I was a little more suited to be a college coach. That was a tough realization because of the obligations I had to the people I worked for, and the players."

Saban recovered nicely; the Dolphins did not. He needs two more victories this season for the Tide's sixth national championship in the past decade. The Dolphins, by contrast, still haven't won a playoff game since 2000.

It could have all been different had Saban signed a free agent quarterback named Drew Brees in 2006. The Dolphins might still have the same coach and quarterback, along with a bunch of postseason success.

But Saban was wary of a deal with Brees, who was coming off shoulder surgery. Instead Saban lost more games that year than he has lost in the past eight seasons combined at Alabama.

He might have wound up in Tuscaloosa regardless, because at some point he concluded college coaching is a better fit for him. He likes the setting. He likes the mentoring. And while he didn't say so, he surely likes the winning.

"I enjoyed coaching in the NFL," Saban said. "I love college coaching."

So Saban got off the coaching carousel. He has been at Alabama for 12 seasons and might be good for 12 more. Meanwhile, his Orange Bowl counterpart, Oklahoma's 35-year-old Lincoln Riley, is the subject of reports about a possible move to the NFL.

Riley said he doesn't draw any lessons from Saban's unsuccessful go at the pros.

"There are million things that go into making it work at Alabama or the Miami Dolphins or LSU or wherever you're at," Riley said.

Saban knows about all of them. Seated in the Dolphins' stadium, he fielded questions for 45 minutes regarding such subjects as Oklahoma's shaky defense ("they're opportunistic"), whether he favors expanding the playoffs ("no"), and his methodology known as the process ("it's ongoing forever"). He referenced Bear Bryant and Joe Namath, and spun a few Sabanisms for a phalanx of TV cameras.

"The road to success is always under construction," he said.

Twice Saban smiled, including when he was asked about the rumor he has a sense of humor, which even his wife, Terry, acknowledges as difficult to confirm.

"Look, it's my fault. I get that," Saban said with a grin. "For a long time I thought I was misunderstood. Miss Terry talks about having a blind spot about how you perceive yourself and how everybody else perceives you — you know, the part in the middle. She said mine is as big as the Grand Canyon."

Saban worked at his dad's service station growing up and figured he might run a car dealership someday. He didn't think of himself as a future coach, and at 67, doesn't love everything about the job.

"I have a granddaughter who's 5," he said. "There are times when I'm saying, 'I haven't seen her for two weeks.' That bothers me."

The bottom line shows no evidence of his misgivings. Some argue he should already be considered football's greatest college coach, and their case may be strengthened in the next few weeks. His legacy is secure thanks partly to an enormous coaching tree that includes a former graduate assistant, Adam Gase, who happens to coach the Dolphins.

Gase's job is in jeopardy after three seasons in Miami, and Saban said the Dolphins would be wise to keep him.

"It takes time to build a program," Saban said. "Sometimes when you make changes, you take two steps back to go one step forward."

That description fits Saban's move to Miami, his worst stumble.