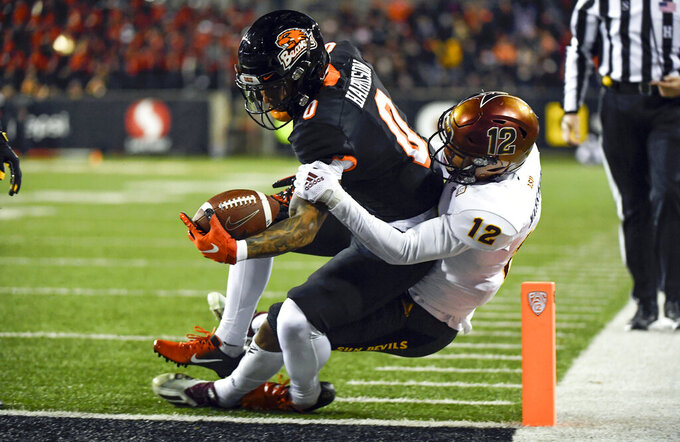 CORVALLIS, Ore. (AP) — A week after becoming bowl eligible for the first time since 2013, Oregon State remains in contention for the Pac-12 North Division title following a 24-10 victory Saturday night over Arizona State.

Jack Colletto ignited a stagnant Oregon State offense by running 47 yards for a touchdown on fourth-and-2 from the Wildcat formation, giving the Beavers a 24-10 lead with 11:24 remaining.

“I was thinking touchdown all the way,” Colletto said with a smile. “Adrenaline kicked in on that one.”

It was the eighth rushing touchdown of the season for Colletto, a former quarterback converted to linebacker in 2019.

The Beavers were in jeopardy of squandering a 17-0 halftime lead.

Punter Luke Loecher mishandled a snap deep in Oregon State territory in the opening minute of the fourth quarter and the Sun Devils recovered at the 4.

If Washington defeats Washington State (6-5, 5-3) at home Friday, and Oregon State wins at Oregon (9-2, 6-2) the following day, the Beavers would play Utah in the Pac-12 championship game Dec. 3 in Las Vegas.

Oregon controls its own destiny and would win the North Division with a win over the Beavers. In a three-way tie between Oregon, Oregon State and Washington State, the Cougars would get the nod in a tiebreaker.

“Some things have got to fall our way for to win the North,” Oregon State wide receiver Trevon Bradford said. “But this game, we had to take care of business and do our part.”

Arizona State (7-4, 5-3) was missing 14 players due to injury. Quarterback Jayden Daniels completed 16 of 27 passes for 166 yards and an interception, and was sacked three times. He led the Sun Devils in rushing with 46 yards.

“I can’t say enough about our defensive effort and performance,” Smith said. “Those guys came to play (and) create some havoc.”

Chance Nolan’s 10-yard touchdown pass to Tre’Shaun Harrison gave Oregon State a 10-0 lead with 9:09 remaining in the first half.

Nolan’s 1-yard touchdown on a quarterback sneak at 1:59 of the second quarter culminated a 13-play, 88-yard drive and increased the lead to 17-0 at the break.

Arizona State drove to the Beavers’ 8-yard line on its first possession of the second half, but settled for Cristian Zendejas’ 26-yard field to make it a 17-3 game.

Rachaad White had 15 carries for 39 yards and added six receptions for 89 yards for Arizona State.

Arizona State: The Sun Devils are playing to enhance their bowl credentials. With Utah’s win over Oregon, Arizona State has been eliminated from Pac-12 South title contention. Utah defeated the Sun Devils 35-21 on Oct. 16.

Oregon State: Baylor had his fifth 100-yard rushing game of the season, finishing with 150 yards on 20 carries. He eclipsed 1,000 yards rushing for the season in the Beavers’ previous game, a 35-14 win over Stanford. The Beavers finished 6-0 at home for the first time since the 2000 season. Oregon State is guaranteed to finish with a winning record for the first time since 2013.

Oregon State’s Fiesta Bowl team from the 2000 season was honored after the first quarter. Members of the 2000 team that finished 11-1 and defeated Notre Dame in the Fiesta Bowl included current coach Jonathan Smith, who was the starting quarterback. The head coach was Dennis Erickson.

The 2000 team was inducted into the Oregon State Hall of Fame on Friday. The Beavers wore throwback uniforms from the 2000 season for Saturday’s game against Arizona State.

Oregon State: The Beavers will be at Oregon next Saturday in their regular season finale.