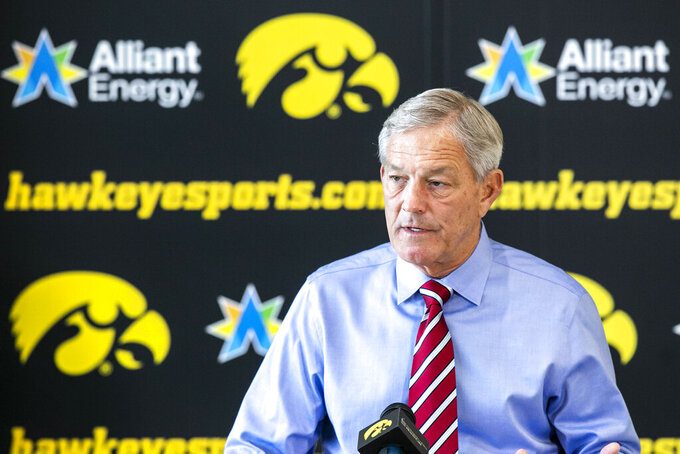 INDIANAPOLIS (AP) — Iowa opened this season as the trendy pick to finish second in the Big Ten West. Michigan was unranked in the preseason poll and wasn't even supposed to contend for the East Division title.

So much for predictions.

Two of the conference's traditional powers will play Saturday in Indianapolis for their first conference crowns since sharing the title in 2004 — and in Michigan's case a possible playoff bid.

It's the title game almost nobody expected.

“A lot of people were pretty low on us," Iowa safety Jack Koerner said. “They were saying we were overrated, things like that. We knew who we were, we knew our identity as a team."

Outsiders didn't think much of the second-ranked Wolverines (11-1, 8-1, No. 2 CFP), either. Lingering questions about coach Jim Harbaugh’s future prompted him to accept a pay cut and change defensive coordinators after going a dismal 2-4 in a fanless 2020 season.

Prognosticators didn’t believe much would change. Narrow escapes against Rutgers and Nebraska and what seemed like a disastrous loss to Michigan State only reinforced those notions.

“There was a lot of noise on the outside,” center Andrew Vastardis said. “But on the inside, we trusted each other, trusted the coaches.”

It made a difference.

The Wolverines rebounded from their only loss with three straight wins. T hen, just when the critics figured they’d lose yet again to archrival Ohio State, Michigan surprised everyone except themselves with a dominant performance against the Buckeyes to clinch its first trip to the Big Ten title game, which began in 2011.

Michigan inexplicably finds itself one win away from Harbaugh's first Big Ten title and potentially two wins away from a January return to Indy for a shot at its first national championship since 1997.

Korener and his Iowa teammates understand.

But instead of cashing it in following a demoralizing 24-7 home loss against Purdue, a 20-point loss at Wisconsin two weeks later and a shoulder injury that sidelined quarterback Spencer Petras against Northwestern, the 15th-ranked Hawkeyes (10-2, 7-2, No. 13 CFP) rallied.

Backup quarterback Alex Padilla won three straight before Petras returned in the second half last weekend and bailed Iowa out of a 15-point deficit at Nebraska. Wisconsin's loss at Minnesota sealed the division title and now the Hawkeyes believe they can end their title drought.

“November football tends to be the most important time, and right now it shows for us," Hawkeyes running back Tyler Goodson said. “We’re undefeated in November. We’ve been strong. We’ve faced a lot of adversity, whether it’s losing two games in a row, or the injuries we’ve had. No matter what it is, we find a way to fight back."

Some wonder how the Wolverines will react to last week's emotional win, their first in a decade over the Buckeyes and just their second in 17 meetings. While fans stormed the field and Michigan savored the postgame party, Harbaugh said this week has been all business. There's a good reason for it.

“There’s not one dude on this team that has a ring,” quarterback Cade McNamara said.

Harbaugh also has decided to give the $500,000 he's already earned in bonus money and any additional cash will be used to help reimburse the university's athletic department employees who took voluntary or mandatory pay reductions during the COVID-19 pandemic.

Iowa is well-known for producing stout defenses under longtime coach Kirk Ferentz. And in a league full of suffocating units, this year's defense stands apart for major reason — takeaways.

The Hawkeyes lead the Football Bowl Subdivision with 22 interceptions and are tied for third with 28 overall turnovers. Eleven players picked off at least one pass this season, and with two more interceptions, Iowa can break the single-season school record set in 1986 and matched in 1987 and 2008.

Michigan’s revamped defense delivered against the Buckeyes and Harbaugh credited the addition of new defensive coordinator Mike Macdonald for the turnaround.