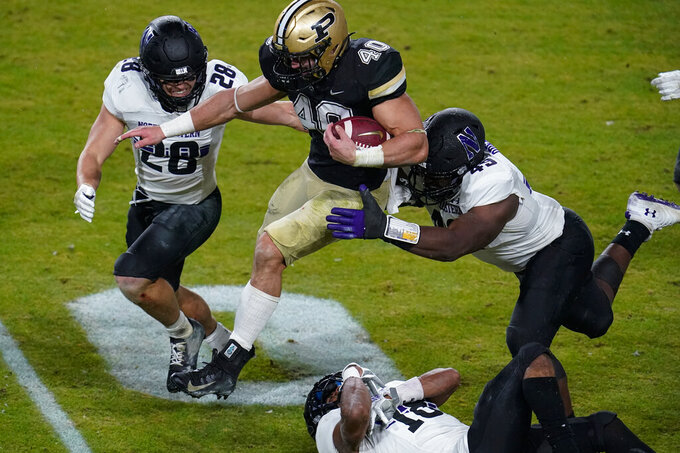 He also understands the Boilermakers need a solid ground game to win consistently.

So after calling 51 pass plays in last weekend's 27-20 loss to No. 23 Northwestern, Brohm and Purdue went back to work in search of a more balanced approach.

“We’ve got a lot of coaches and they know that that’s kind of what I’ve been telling them all offseason and all season — we’ve got to make sure we have a commitment to the run," Brohm said, blaming himself for not sticking to last weekend's plan. “At the same time, when it gets to game time and things aren’t going your way, you have to be able to adjust and do what works."

For the Boilermakers (2-1), it was ugly. The Wildcats' defense gave up just 2 yards rushing on 17 carries, a minuscule average of 0.12 yards that forced Aidan O'Connell to spend most of the game airing it out in windy, rainy conditions. Northwestern also kept receiver David Bell largely in check.

With a one-dimensional offense and no serious deep threat, Purdue became too predictable.

While O'Connell produced solid numbers mostly by throwing underneath — 28 of 51 with 263 yards, two touchdowns and no interceptions — he was sacked three times and lost a fumble.

This week's goal: Reduce the workload on O'Connell's arm.

Zander Horvath has done his part, becoming the first Purdue runner since 1997 to top 100 yards in three consecutive Big Ten games. While his streak ended Saturday, he did catch nine passes for a team-high 100 yards.

But Horvath, like O'Connell, has been carrying a heavy workload.

The 230-pound running back has 53 of Purdue's 75 carries this season. O'Connell's scrambles account for 12 rushes, with six others being kneeldowns. That leaves just four other carries through three games.

Help could be on the way. Sophomore King Doerue logged one carry last weekend, his first of the season after returning from an injured hamstring. And Brohm sounds optimistic about having freshman Tirek Murphy back for Friday night's game at Minnesota (1-3).

“ Zander has been able to carry the load and he’s done a good job,” Brohm said. “We’ve got to spell Zander more, but we want to make sure that when we’re doing that we still feel very good about the preparation time all of our guys have had. But that would be the best outcome, to get more guys involved.”

While expanding the running back rotation may help keep players fresh, a thinning rotation along the offensive line could help, too.

Brohm acknowledged last week's game, and Purdue's inability at time to move Northwestern's defensive front, may have solidified who the Boilermakers view as their top offensive linemen.

“There were a couple times we really couldn’t create movement, and that was a problem,” Brohm said. “So it’s a combination of a few things. I think I probably got off the running game a little too soon.”

Simply changing opponents should help, too.

After facing the Football Bowl Subdivision’s No. 8 rushing defense, the Boilermakers face a Minnesota defense ranked 115th out of 126 against the run.

But there's one other wrinkle Brohm wants to see out of his ground game — O'Connell making more plays with his feet. So far, O'Connell hasn't looked entirely comfortable running down field. If he can mix in a few effective rushes, though, Brohm knows it will open up the field for big plays.

1 minute ago
By Hank Kurz Jr. 3 minutes ago
By Jimmy Golen 2 hrs ago
By Bob Ferrante 3 hrs ago
By Cliff Brunt 4 hrs ago