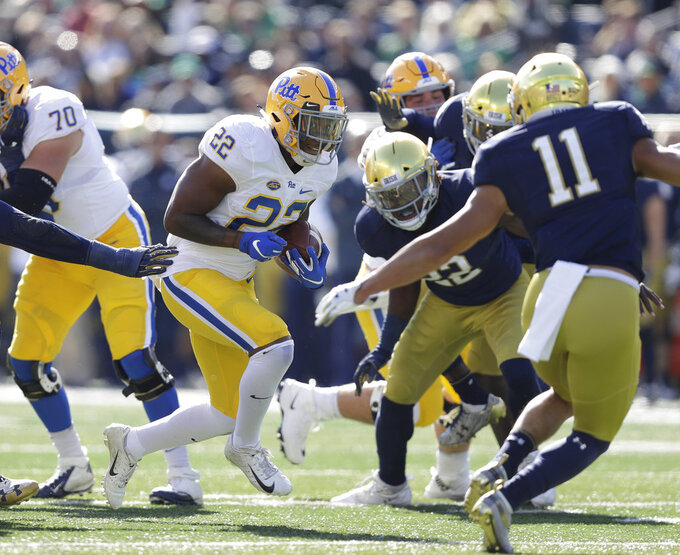 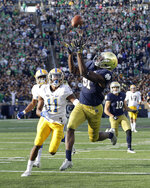 SOUTH BEND, Ind. (AP) — Wide receiver Miles Boykin had a message for quarterback Ian Book after No. 5 Notre Dame remained unbeaten, coming from behind and then holding off Pittsburgh.

"I told him winning is fun, but let's not win like this again," the 6-foot-4 Boykin said after he caught the game-winning, 35-yard touchdown pass from Book with 5:43 remaining in the fourth quarter Saturday to secure the 19-14 win.

The Book-to-Boykin combination is beginning to etch itself in Notre Dame lore. They have had memorable moments before, including the 55-yard touchdown with 1:28 in the Citrus Bowl last Jan. 1 that provided the Irish with a 21-17 victory over LSU.

Their latest TD combo helped to improve the Irish to 7-0 for the first time since 2012, the year they went to the BCS title game for coach Brian Kelly, who was feeling a little better after the Irish held off the upset bid by the Panthers (3-4).

"Proud of our guys and their grit — they hung in there and found a way to win," Kelly said. "We were not sharp mentally, we didn't execute efficiently. They weren't at their best and Pittsburgh played well. We still found a way."

Pitt led 14-12 thanks to a long first-quarter touchdown drive and a 99-yard kickoff return by Maurice French to start the second half.

But the Irish, who were held to 80 yards rushing, prevailed behind Book, who is 4-0 as a starter since replacing Brandon Wimbush. Book was intercepted twice, but finished with 264 yards passing. He was 13 of 14 for 158 yards in the second half, no reception bigger than the scoring toss.

"I didn't even see (Book) throw it," Boykin said after finishing with four receptions for 84 yards. "I just saw the ball up there and thought I have to catch up to this. It was a dime. (Ian's) a baller. He's always calm and poised."

As far as Book is concerned, it's mutual admiration.

"(Miles is) really rangy, so I just got to put it up there and give him a chance," Book said. "Day in and day out, he works so hard. I think our chemistry is starting to come along a little bit."

Pat Narduzzi's Panthers were looking to upset a top-five team for the third straight season after knocking off No. 3 Clemson in Death Valley during the 2016 season and No. 2 Miami last November in Pittsburgh.

"I feel bad for our kids in the locker room," Narduzzi said. "I'm disappointed for them. They fought their tails off. We were ahead almost the entire game. Sometimes you can't control what you can't control. We went toe-to-toe with a top-five team and we didn't pull it off in the end."

Kenny Pickett was 19 for 28 for 126 yards, and was sacked by Khalid Kareem — Notre Dame's only sack of the game — for a loss of 14 yards on Pitt's final possession to set up a fourth-and-long the Panthers could not convert. Pitt also ran a strange faked punt, inserting third-string quarterback Jeff George Jr. as the punter and having him throw, on its second-to-last drive around midfield that failed.

"(Trying) to get a first down," Narduzzi said. "That certainly wasn't the game."

Pittsburgh: The Panthers gained just 12 yards on their last three drives of the first half. Their first, however, was a thing of beauty: 17 plays, 88 yards, six first downs, consuming 9:43 of the clock and ending with Ollison taking a direct snap, faking an end-around handoff and running into the end zone on second-and-goal from the Irish 9.

Notre Dame: The Irish trailed for the first times after the first quarter (7-0), at halftime (7-6) and after three quarters (14-12), and they were their own worst enemy with turnovers, quarterback sacks and penalties at inopportune times.

The Irish also prevailed at home 29-26 in triple overtime in 2012 in a game in which the Panthers missed a possible game-winning field goal in the second extra period.

Pittsburgh: Off next week and plays host to Duke Oct. 27.

Notre Dame: Off next week and plays Navy in San Diego Oct. 27.