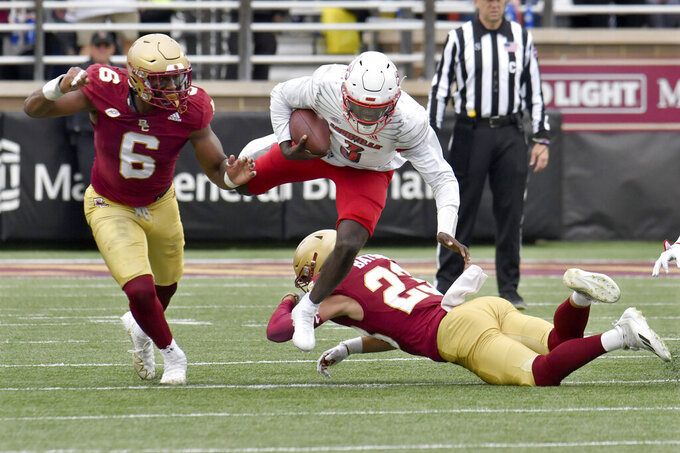 Line: Louisville by 2 1/2, according to FanDuel Sportsbook.

Both teams are seeking their first conference wins of the season, and the Cardinals are looking to end a string of nine consecutive losses when they've been leading or tied in the fourth quarter. Virginia's victories both came at home, where they will play five of their next six games.

The Cavaliers' running game against the Cardinals' defense. Virginia has failed to eclipse 100 yards on the ground twice already this season — it managed just 93 yards on 25 tries in its 38-17 loss at Duke last week, putting a crimp in offensive coordinator Des Kitchings' hope for a balanced offense.

Virginia: QB Brennan Armstrong. After passing for 300 yards 10 times and 400 yards six times last season, Armstrong has failed to reach 300 yards in any of the Cavaliers' five games. He's struggled in the new offense that seeks more balance than last year, when he threw for 4,449 yards.

Cardinals QB Malik Cunningham has accounted for four touchdowns in back-to-back games and leads the ACC with nine rushing scores. ... He's the sixth FBS player to throw for 9,000 yards and rush for 3,000 in his career. ... The Cardinals' loss at BC came by the same score as Virginia's victory at Louisville last season, 34-33. In that game, the Cavaliers rallied from a 17-point fourth-quarter deficit. ... Armstrong needs two touchdown passes to eclipse Matt Schaub's school record of 56 for his career.