College Football Picks: A week where things could get weird 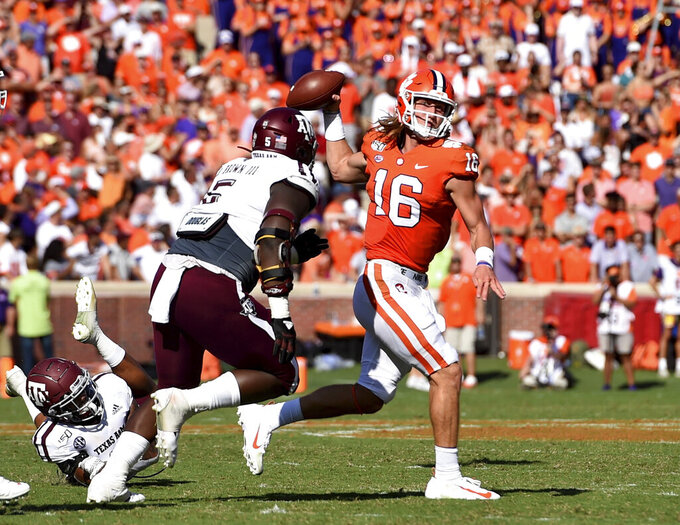 No ranked teams are playing each other this week in college football. This could go two ways: Very boring or totally batty.

The last time there was a schedule like this was 23 months ago and the result was the latter. Seven ranked teams lost to unranked teams, six playing on the road and three that were favored by at least two touchdowns.

The beat went on the next day, though not all could be considered upsets. No. 24 Texas Tech and No. 25 Navy lost road games and were never ranked again that season.

Some of the results had serious postseason implications. No. 10 Auburn lost at LSU and then did not lose again until the SEC championship. Maybe the biggest stunner of all came after dark in the Pac-12 when No. 5 Washington lost 13-7 at Arizona State.

This week, Clemson returns to Syracuse for the first time since that Friday night stunner. The Tigers are favored by four touchdowns, one of four top-six teams favored by at least two touchdowns on the road this weekend.

The picks (FBS-FCS matchups not included):

No. 20 Washington State (minus 9) at Houston

The Orange squeezed the intrigue out of this game by getting blasted by Maryland last week ... CLEMSON 52-20.

You might remember the last time the Tide and Gamecocks played in 2010 as The Stephen Garcia Game. Could this be The Ryan Hilinski Game? ... ALABAMA 45-14.

Wildcats snapped a three-decade losing streak to the Gators last year, and try to make it two straight, but without QB Terry Wilson (knee) ... KENTUCKY 24-21.

No quarterback has thrown more TD passes (eight) without an interception this season than the Longhorns' Sam Ehlinger ... TEXAS 45-10.

Pitt's run defense has been stingy so far (2.65 per rush allowed), and the Nittany Lions couldn't get going on the ground against Buffalo ... PENN STATE 31-16.

The Knights have an on-going quarterback competition and freshman Dillon Gabriel might emerge as the man ... UCF 34-24.

Hawkeyes have won four straight against the Cyclones, entering the most anticipated game in the CyHawk rivalry in years ... IOWA STATE 24-23.

Potentially tumultuous season at USC only gets weirder if the Trojans rip off a bunch of victories under coach Clay Helton ... USC 28-21.

Desperation can be a great motivator. No team in the country should be more desperate than Florida State ... VIRGINIA 28-24.

The Bulldogs' offense has been humming, but the status of QB Tommy Stevens (shoulder) is unclear ... MISSISSIPPI STATE 34-20.

Air Force (plus 3½) at Colorado — @scott_callihan

Hard-to-figure matchup of Big 12 and Big Ten teams, especially with the Horned Frogs yet to play an FBS opponent ... PURDUE 35-34.