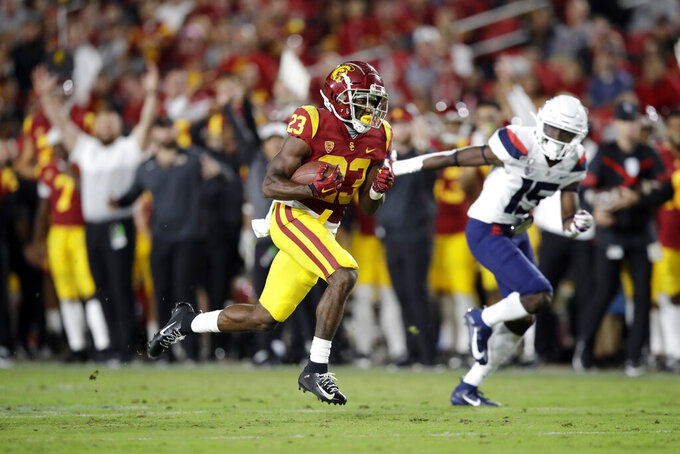 LOS ANGELES (AP) — Southern California running back Kenan Christon showed he can provide big plays, scoring on touchdowns runs of 55 and 30 yards in a memorable debut against Arizona.

Now the freshman with elite speed will have to show he can handle a bigger role, as Christon is expected to start for the Trojans at Colorado on Friday because of a spate of injuries at the position.

Redshirt freshman Markese Stepp is out up to five weeks because of an ankle injury he suffered on Saturday against the Wildcats that will require surgery, coach Clay Helton said. Junior Stephen Carr did not practice Monday after sustaining a hamstring strain in the same game. Redshirt junior Vavae Malepeai remains out after undergoing knee surgery last week.

"I've never lost three backs in one week in 25 years before, but you know what, there's a first time for everything," Helton said.

Those injuries allowed Christon to come in and shred a tired, demoralized Arizona defense for 103 yards on eight carries. His two touchdown runs showcased speed not seen in the Coliseum since Reggie Bush or Joe McKnight starred for the Trojans a decade earlier, with Christon coming off left tackle into the open field and hitting top speed in nearly identical fashion on both plays.

Arizona safety Christian Young looked to have an angle on Christon during the 55-yard run but couldn't close on the 2019 California high school 100-meters champion in time. That is exactly what offensive coordinator Graham Harrell wanted to happen, though he couldn't express his satisfaction in the play in real time.

"But we couldn't get much in because (running backs coach Mike) Jinks was yelling over the headset and no one could say anything," Harrell said.

However, Harrell has seen the 5-foot-10, 181-pound Christon do more than get out to the perimeter.

"Obviously he's fast and special with the ball, but what I didn't know coming in was how physical he'd be and how tough he'd be and if he wanted to run between those tackles," Harrell said. "Getting as many reps as he has inside this year, he's shown that a lot, and that's been good to see. And then he's also a kid that has shown to be physical in pass protection."

It turns out the development of such a well-rounded game goes back to when Christon started playing football in sixth grade. His coaches wanted to use the elusive Christon at wide receiver, but his struggles to catch the ball led him to play running back instead.

"They just thought, 'Oh, he's fast, so we'll just hand him the ball and let him run outside,'" Christon said.

A relative newcomer to the sport, Christon doesn't compare himself to or model his game after memorable speedsters from recent years such as Bush, Percy Harvin of Florida or De'Anthony Thomas of Oregon. Instead, Christon likens himself to Walter Payton because of his father's fondness for the legendary Chicago Bears running back.

Jinks doesn't think Christon would have been ready for the physical toll of the heavy workloads Payton had during his heyday if the freshman had to be the feature back over an entire 12-game regular season. But that will be less of a concern more than halfway into Christon's first year of college football.

"Five, six, eight games, whatever it might be until we get some of those guys back, he'll be able to handle it," Jinks said. "We'll give him all he can handle."

The other two scholarship rushers behind Christon are former walk-on Quincy Jountti and Dominic Davis, a redshirt senior who was moved back to offense after playing cornerback.

Even with those unproven options at running back, Harrell needs balance to make the game easier on freshman quarterback Kedon Slovis as USC tries to win the Pac-12 South.

"As a quarterback, it's hard to be on every night," Harrell said. "I mean, at any position, it's hard, but when you're the quarterback everyone sees it a lot more. . If you ever have a night where the quarterback is struggling a little bit, you can help him settle in and you can take some pressure off of him if you can run the football successfully."

Christon said he is up to the challenge, and Jinks knows pure speed can make up for inexperience.

"You know he's going to eat up some angles and there are going to be some explosive plays, so you got to take the good with the bad," Jinks said.