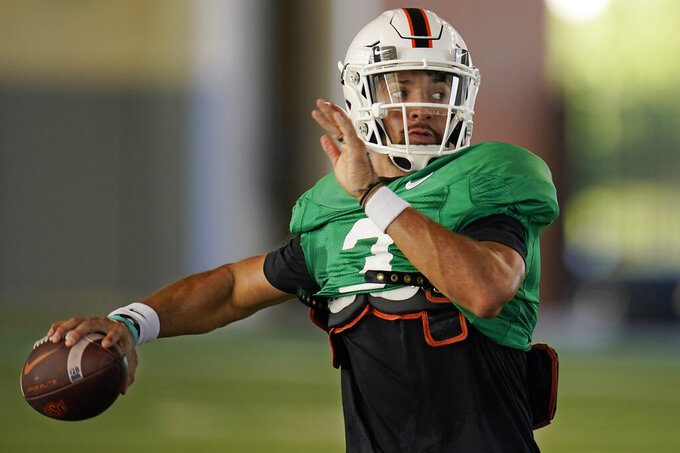 The defense has caught up and that makes the Cowboys a threat to contend in the Big 12 this season. Oklahoma State returns nine starters from a unit that anchored an 8-3 finish last season.

“I’ve been very impressed with our defensive coordinator, Jim Knowles, and his staff, and his willingness to adjust to our league,” Gundy said. “I feel more comfortable with our defense going on the field than I have maybe in my first 12 to 14 years as a head coach.”

He could have left for the NFL.

“I think at one point that, like most young men, he felt like that he wanted to try to move on and make some money playing this game,” Gundy said. “And then, at some point, he called and said that he would like to return and develop himself for another year.”

Linebacker Malcolm Rodriguez chose to return for an extra season after leading the team with 82 tackles last season. Safety Tre Sterling led the team with 12.5 tackles for loss a year ago.

On offense, Spencer Sanders is one of the most versatile quarterbacks in the Big 12. He has passed for 4,072 yards and rushed for 897 in his career. He was the MVP of the Cheez-it Bowl win over Miami.

Gundy said he likes how Sanders is developing mentally to maximize his physical gifts. He said the pandemic slowed Sanders’ growth.

“There’s never been a question with his toughness, his commitment, and his competitive nature,” Gundy said.

Cole Birmingham and Hunter Anthony were starters before injuries forced them out of the season opener last season. Preston Wilson started four games a year ago.

The injuries forced the Cowboys to play young guys who weren't physically ready to play. Gundy said the experience and the year of offseason work should help.

“All of the butt whippings they took (last season) should help them this year,” Gundy said. “We’ve had a couple of adjustments. We’re already better just by the depth chart."

Oklahoma State has to replace Tylan Wallace, one of the school’s all-time best receivers.

“We have a number of guys that we feel like should develop as the season goes on,” Gundy said. “We don’t necessarily have what would be a marquee player that we have traditionally had at that position at Oklahoma State.”

Oklahoma State will use several backs to replace Chuba Hubbard, who now is in the NFL with the Carolina Panthers.

The two main returnees are LD Brown and Dezmon Jackson. Brown has rushed for 1,044 yards and eight touchdowns in his career with a 5.7-yard average per carry. Jackson ran for 235 yards in his first career start last season against Texas Tech.

The defensive end could be among the nation’s best. As a sophomore last season, he had 22 tackles, 4.5 sacks, four passes broken up, four quarterback hurries and two fumbles forced. He draws significant attention from opponents, freeing up his teammates to make plays. He had nine quarterback hurries as a freshman.