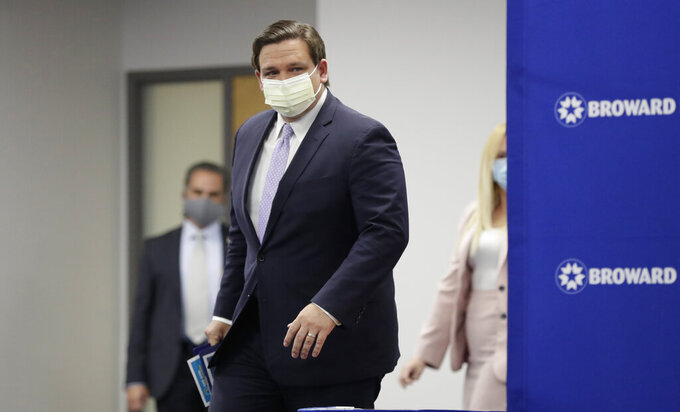 Florida Gov. Ron DeSantis arrives at a news conference, Monday, Aug. 3, 2020, at the Broward Health Corporate Office in Fort Lauderdale, Fla. On Friday, the governor's office released a video promoting "One Goal One Florida," a public service campaign that also urges Floridians to keep their distance and wear masks as a way to lower the risk of coronavirus infections. (AP Photo/Wilfredo Lee)

TALLAHASSEE, Fla. (AP) — Republican Florida Gov. Ron DeSantis said he will push to get the annual football game between Florida State and the University of Florida rescheduled, saying Thursday that keeping the famed rivalry going will be good for the state.

He made his effort known during a discussion on high school sports that included two former star athletes from each school: Charlie Ward, who won a Heisman Trophy as Florida State's quarterback and later played in the NBA, and Lito Sheppard, a cornerback at UF who was twice selected to the Pro Bowl while later playing with the Philadelphia Eagles.

“We do have a situation coming up where we’re going to have a college football season without Florida playing Florida State,” DeSantis said. “Charlie, Lito — I am going to see if we can make sure that rivalry game continues because I know it’s one we all look forward to ever year.”

Florida, which plays in the Southeastern Conference, and Florida State, which plays in the Atlantic Coast Conference, have played each other every year since 1958. This year because of the coronavirus pandemic, the ACC initially looked at a conference only schedule, then approved allowing one non-conference game under certain conditions. That left open the possibility of a matchup between the rivals, but the SEC later told schools they had to stick to a conference only schedule.

DeSantis, who captained the Yale baseball team as an undergraduate, noted, “I don't have a dog in the fight.”

“Sports is kind of one of the great unifiers. Now Florida-Florida State, that’s not necessarily unifying in our state, but you know what I mean,” DeSantis said. “It’s something that a lot of Floridians and Americans really appreciate.”

This corrects an earlier version that said the ACC required a conference only schedule.