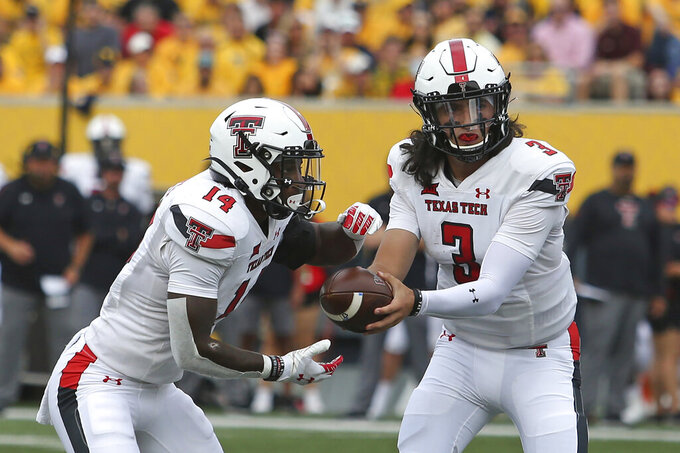 MORGANTOWN, W.Va. (AP) — The score was tied, Texas Tech was about to take over deep in its own territory with time running down in the fourth quarter, and quarterback Henry Colombi had one thing to say to running back SaRodorick Thompson.

“I turned to SaRodorick and I said, 'This is why I play college football," Colombi said. "It's for moments like these.”

Colombi drove the Red Raiders 70 yards to set up Jonathan Garibay's 32-yard field goal with 18 seconds left for a 23-20 victory over West Virginia on Saturday.

Garibay had three field goals in all and Thompson had two short touchdown runs for Texas Tech (4-1, 1-1 Big 12), which bounced back from a 70-35 loss at Texas.

“We wanted to capitalize on our opportunities this week," Colombi said. "We had a great week of practice. And I'm real proud of the guys.”

Despite missing numerous starters, including key offensive playmakers, the Red Raiders beat the Mountaineers (2-3, 0-2) for the third straight time, all when using a backup quarterback.

Colombi staked Texas Tech to a 17-0 lead, then watched West Virginia come back. The Mountaineers were driving for a potential go-ahead score. On third-and-goal from the Texas Tech 6, Jarret Doege's pass toward an open Leddie Brown sailed out of the end zone, forcing a field goal with 4:34 left to tie the game at 20-20.

“To kind of bend and then definitely not break, that was huge,” Texas Tech coach Matt Wells said.

Colombi had plenty of time left. He threw 42 yards to Kaylon Geiger to put Texas Tech at the West Virginia 38. Thompson then ran 16 and 13 yards on the next two plays to put the Red Raiders in range for the winning field goal.

West Virginia wasn't able to get past midfield on its final drive.

Texas Tech didn't need Erik Ezukanma to move the ball. The Big 12's leading receiver did not play after getting hurt against Texas last week. But the Red Raiders just didn't go down the field in their customary huge chunks, either. Texas Tech also was without leading rusher Tahj Brooks, who missed his second straight game with a leg injury.

West Virginia outgained Texas Tech 424 yards to 346 after the Mountaineers were limited to 109 yards in the first half in their final home game for nearly a month.

After the Mountaineers managed just a field goal after halftime in each of its three previous games against Power Five opponents, coach Neal Brown stressed all week that his offense needed more explosive plays.

It took some time, though.

After getting shut out in the first half, West Virginia scored on its first three second-half possessions. Doege broke a streak of eight quarters without a touchdown pass when he found Isaiah Esdale in the end zone from 14 yards out late in the third quarter to tie the score at 17.

“I liked how our guys competed in the second half,” West Virginia coach Neal Brown said. “But the first half, inexcusable.”

Texas Tech: The Red Raiders entered the game with a national-best nine offensive plays of at least 50 yards and 12 plays of 40 yards or more. With Colombi getting his first start of the season in place of the injured Tyler Shough, Texas Tech was much more methodical, needing eight plays or more on four of its five scoring drives.

“We just took what the defense was giving us,” Colombi said. “After the first couple of drives, they were kind of playing back a little bit. They didn't want to get beat over the top and they were giving everything else underneath. So that's what we attacked.”

West Virginia: The Mountaineers have yet to play a complete game on offense against a major opponent this season, now have a two-game losing streak and have their next two games on the road.

West Virginia plays at No. 21 Baylor next Saturday.