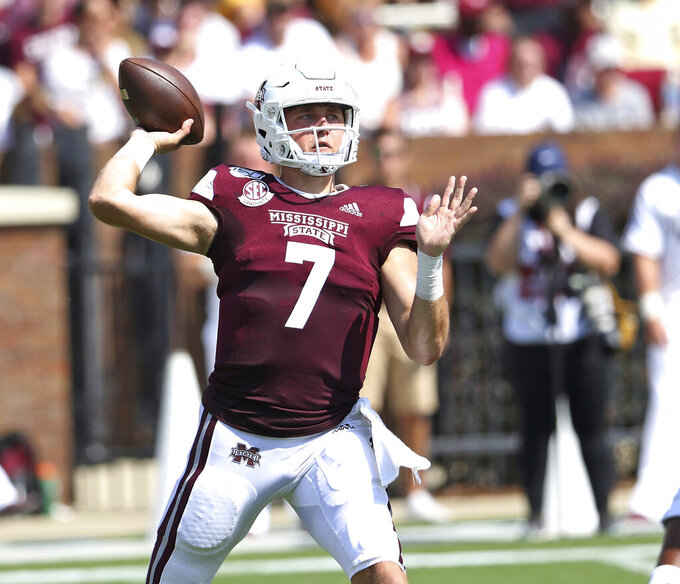 KNOXVILLE, Tenn. (AP) — This was supposed to be the year that the Southeastern Conference showcased its wealth of experienced quarterbacks up and down the league.

Plans have changed for a number of schools.

Injuries have wreaked havoc around the conference, forcing coaches to rely on newcomers.

South Carolina lost senior starter Jake Bentley to a foot injury during the opening week of the season. Kentucky's Terry Wilson and Mississippi State's Tommy Stevens were knocked out of games last week. Their replacements included two true freshmen and a transfer.

"It's changed because of the number of guys who are leaving early for the NFL draft and the number of (quarterbacks) that are going to transfer," South Carolina coach Will Muschamp said. "So if you don't become the starter, you transfer and leave and then all of a sudden you look up and all you've got left behind whoever may be your incumbent starter is a true freshman."

Freshman Ryan Hilinski is South Carolina's starting quarterback for now with Bentley out indefinitely. Wilson is out for the season with a torn patellar tendon, leaving Kentucky to rely on Troy transfer Sawyer Smith.

Mississippi State coach Joe Moorhead said Stevens' status for the Bulldogs' game Saturday with Kansas State is uncertain due to an upper-body injury. Freshman Garrett Shrader stepped in for Stevens last week in a 38-15 victory over Southern Mississippi.

Those injuries have skewed the narrative in what was billed as the year of the experienced quarterback in the SEC.

Eight of the SEC's 14 teams were returning their starting quarterbacks from last season. Four of the other six teams brought in graduate transfers: Missouri's Kelly Bryant (transfer from Clemson), Arkansas' Ben Hicks (SMU) and Nick Starkel (Texas A&M), Vanderbilt's Riley Neal (Ball State) and Mississippi State's Stevens (Penn State). Of those graduate transfers, Stevens was the only one without starting experience.

The SEC's top teams are indeed getting impressive play from veteran quarterbacks, whether it's Tua Tagovailoa at No. 2 Alabama, Jake Fromm at No. 3 Georgia or Joe Burrow at No. 4 LSU.

But other schools are dealing with some unwelcome QB surprises.

Tennessee is off to its first 0-2 start since 1988 as Jarrett Guarantano has become increasingly prone to the mistakes he avoided making last season. Hicks has struggled enough for Arkansas that the Razorbacks have named Starkel their new starter.

At least their season-opening starters are still healthy. South Carolina and Kentucky don't have that luxury.

Rodgers recommends that Kentucky give versatile receiver and former high school quarterback Lynn Bowden Jr. about 15 snaps per game from the Wildcat formation to help compensate for Wilson's absence.

Wilson "was dynamic with the ball in his hands, so you had to scheme for that as a defense," said Rodgers, who was Vanderbilt's starting quarterback in 2011-12. "When you look at what they have now with Sawyer Smith, yes he's played some football - 13 games for Troy last year, almost 1,700 yards, 15 total touchdowns — he's played football. But he's not the skill set that you have to scheme for his athleticism. And if you don't have an elite quarterback in this day and age — a Tua, a (Clemson's) Trevor (Lawrence), a Jake Fromm - you have to give defenses something (else) to worry about."

Kentucky and South Carolina both offer early evidence that losing an experienced quarterback doesn't have to be devastating.

Smith started seven games for Troy last season and threw for a 54-yard touchdown in his first pass after replacing Wilson in Kentucky's 38-17 victory over Eastern Michigan last week.

"That's a big deal, that Sawyer has been through this," Kentucky coach Mark Stoops said. "So it's nothing new to him. He has a lot of confidence."

While Smith's Troy experience undoubtedly helped Kentucky, South Carolina and Auburn have shown it's also possible to succeed with a freshman quarterback.

Hilinski was the nation's No. 2 pro-style quarterback prospect in his class according to composite rankings of recruiting sites compiled by 247Sports. In his first start, South Carolina beat Charleston Southern 72-10 and set a school single-game record with 775 total yards.

Auburn was the one SEC team that handed its quarterback job to a true freshman before the season. Bo Nix responded by throwing a touchdown pass with nine seconds left to beat No. 15 Oregon in his debut performance.

"He hasn't looked bright-eyed or shook or anything like that at any time," Auburn coach Gus Malzahn said.

Those freshmen will face more adversity once they get their first taste of SEC competition.

Consider that Hilinski made his first start against a Football Championship Subdivision program. That didn't quite prepare him for what he will encounter Saturday when South Carolina hosts Alabama.

"You see more and more guys starting younger, and that's a product of offensive systems being simpler for the quarterback because they're going faster, because there's no huddling," Rodgers said. "You don't have to spit out - like I did - 11-12-13 words a couple of times in a row in a huddle and sprint to the line of scrimmage and have checks and protections. They don't ask quarterbacks to do as much, so yeah, I think it's a little easier just from a system standpoint, a plug-and-play standpoint for these guys to get in.

"Now, that doesn't equate to success. Is it easier for them to operate the offense? For sure. But defenses are still complex, especially in the SEC. There are too many good defensive coordinators. At some point, your inexperience is going to show because defenses are going to figure you out."