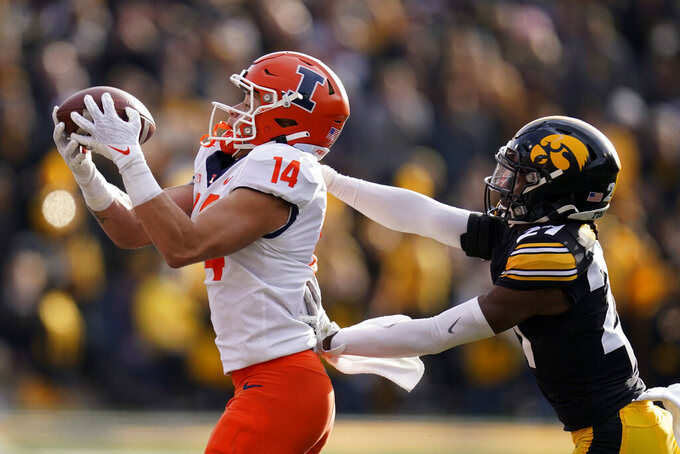 IOWA CITY, Iowa (AP) — Charlie Jones ran the length of the field, and then kept running.

Jones had a 100-yard kickoff return for No. 18 Iowa’s first touchdown and the Hawkeyes went on to beat Illinois 33-23 on Saturday.

Iowa (9-2, 6-2 Big Ten) was trailing 10-0 in the first quarter when Jones took the kick near the right corner of the end zone and ran through a hole on the left side for the score.

“I knew I had a great block to the left, so I just cut inside,” Jones said. “Then I saw guys blocking downfield. So it was just me and some grass. Guys were just working along the way.”

But after Jones' scored, he ran to the grandstands at the back of the end zone.

Jones said it was a designed return the Hawkeyes had been working on the past week.

“Thank goodness we practiced that,” Iowa coach Kirk Ferentz said. “When you get a play like that, boy, it helps.”

It helped the Hawkeyes stay in the Big Ten West heading into the final weekend of the season.

Iowa is tied with Wisconsin at the top of the standings, but the Badgers hold the tiebreaker because of the 27-7 win over the Hawkeyes on October 30.

The Hawkeyes were scoreboard watching after the game, keeping track of Wisconsin's game against Nebraska. The Badgers won 35-28.

Iowa plays at Nebraska next Friday, while Wisconsin plays at Minnesota on Saturday.

“We know what's going on,” running back Tyler Goodson said. “We want to play in the Big Ten championship game. ... From now on, our focus is going to Nebraska and getting a win."

Iowa wide receiver Arland Bruce IV had a 2-yard run for a touchdown and Caleb Shudak kicked four field goals, including a 51-yarder in the second quarter. Linebacker Jack Campbell's 32-yard interception return for a touchdown with 1:36 to play closed the Hawkeyes' scoring.

Iowa was outgained 312-255, but the Hawkeyes had enough offense for the win.

“The real common bond there is we find a way to win,” Ferentz said. “It's still what the game's about. You talk about style points, and that's important at some point maybe. But to me, it's about trying to be successful, whatever the given situations are.”

James McCourt had three field goals for the Illini.

Tyler Goodson ran for 132 yards for the Hawkeyes, his third 100-yard game of the season. Quarterback Alex Padilla, making his second start, was just 6 of 17 for 83 yards.

“We grind it out,” Padilla said. “Just playing complimentary football. We know it’s going to be a fist fight every time we go out.”

Peters, who threw a 16-yard touchdown pass to Isaiah Williams in the closing seconds, was 16 of 36 for 248 yards. Illinois' Chase Brown, who was averaging 106.4 rushing yards per game, was held to 42 yards on 13 carries.

“We kind of saw them as a running team, and we wanted to shut that down and make them one-dimensional," said Iowa safety Dane Belton, who had his Big Ten-leading fifth interception.

Iowa extended its winning streak against the Illini to eight games. The Hawkeyes have won 13 of the last 14 in the series.

Illinois was playing without head coach Bret Bielema, who tested positive for COVID-19 earlier in the week.

“I’m disappointed, because I wanted to give him the game ball,” assistant head coach George McDonald said. “There’s a lot of people in there who are hurting because we wanted to get this done. We had chances to get it done, and we didn’t. So we’ve got to get better.”

Jones' kickoff return was the fourth 100-yard kickoff return in Iowa history. The last one was by C.J. Jones to open the 2003 Orange Bowl against USC.

Charlie Jones is the third player in program history to return a kickoff and a punt for a touchdown in a career.

The last Iowa player to return a kickoff for a touchdown was Ihmir Smith-Marsette, who had a 98-yarder in the 2019 Holiday Bowl.

Iowa leads the nation with 21 interceptions, and is third with 26 takeaways. Eleven different Hawkeyes have at least one interception this season.

Iowa is plus-18 in turnover margin in its nine wins and minus-6 in its two losses.

Iowa defensive back Henry Marchese was greeted by more than just his parents during the pregame Senior Day ceremony. Marchese’s twin brother, Michael, a senior tight end for Illinois, was also there. The two hugged to a loud ovation from the crowd.

Henry Marchese, who plays on special teams, had a key block on Jones’ kickoff return.

Iowa’s conservative offense drew scattered boos at times from the home fans, especially on a second-quarter possession inside Illinois territory when the Hawkeyes ran three consecutive running plays for minus-4 yards, leading to a Shudak field goal. Still, Iowa stayed in the Big Ten West Division title race heading into the final weekend of the season. “It seemed like it was a game of missed opportunities out there,” Ferentz said.

The Hawkeyes, who have been in the rankings all season, likely hold their position with the win.