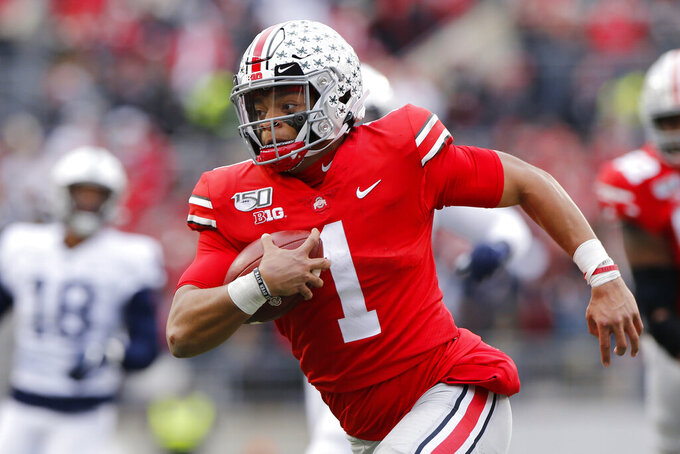 FILE - In this Nov. 23, 2019, file photo, Ohio State quarterback Justin Fields plays against Penn State during an NCAA college football game, in Columbus, Ohio. Fields, a sophomore and the Buckeyes’ Heisman Trophy finalist quarterback, said online classes allow him to split his time between studying at home or relaxing with Netflix and the Woody Hayes Athletic Center, where besides football facilities there is a new lavish lounge for players that offers made-to-order meals, massage chairs, video games on big screens and a cryogenic chamber. (AP Photo/Jay LaPrete, File)

SCOTTSDALE, Ariz. (AP) — Ohio State quarterback Justin Fields may not be fully healthy when the second-ranked Buckeyes face No. 3 Clemson in the Fiesta Bowl.

Fields said Tuesday his left knee is only 80 to 85% heading into Saturday's College Football Playoff semifinal in Glendale. He plans to wear a small brace during the game and brought a larger one in case anything happens.

"My knee's probably not where I want it to be right now," Fields said. “But I think with treatment every day and just resting it every day, hopefully, it will be better by the game.”

Fields aggravated a previous injury against Penn State on Nov. 23 and again the following week against Michigan when a teammate rolled into his knee. He struggled in the first half of the Big Ten championship game against Wisconsin before throwing two touchdown passes as the Buckeyes rallied for a 34-21 victory.

Fields has been practicing in the buildup to the Fiesta Bowl but with limited mobility.

“I try to get as many reps as possible," he said. “I really haven't missed any reps, I've just been getting in there and playing. I just can't really move like I want to.”

Fields finished third in the Heisman Trophy voting and was named the Big Ten offensive player of the year after throwing for 2,953 yards, 40 touchdowns and one interception.

The winner of Saturday's game will face No. 1 LSU or No. 4 Oklahoma in the national title game Jan. 13 in New Orleans.

Clemson running back Travis Etienne has never enjoyed attention, preferring to let his play do the talking. He often skipped talking to the media in high school and once blew off an awards ceremony to play basketball.

Now that he's been to the CFP three straight years (five straight overall by the Tigers), the junior is starting to get more comfortable talking about himself — sort of.

“In high school, I think I dodged media because I wasn't obligated, but here it's a little different,” he said. “I'm coming to love it, but I could definitely live without this part of the game.”

Etienne began drawing attention last season, when he was named a Doak Walker Award finalist after running for 1,658 yards and a school-record 24 touchdowns as a sophomore. As a junior, Etienne ran for 1,500 yards and 17 touchdowns, adding 29 catches for 298 yards and two TDs.

"It's kind of weird, gives me a different perspective because people think I'm a great football player," he said. “But I'm just another guy out here playing the game he's loved since he was a little kid.”

It will be nothing new.

As assistants under Bob Stoops at Oklahoma between 2002-10, Venables and Wilson tried to get the best of each other every day in practice.

“Those practices were so fun because it was so competitive and you never knew what you were going to get,” said Wilson, who spent six seasons as Indiana's head coach before becoming Ohio State's offensive coordinator in 2017. “It made you work. One day they would get you and the next day you'd come back and get them. It's never personal. It's like you're playing with your brother and you're trying to kick his butt. Sometimes you do, sometimes you get hammered.”

Ohio State's 2017 recruiting class was one of the best in program history, coming in second nationally to Alabama in the 247Sports composite.

High-ranking classes don't always pan out, but this one sure did.

Signed by previous coach Urban Meyer, the class from three years ago represents the core of this year's team under first-year coach Ryan Day.

Edge rusher Chase Young, rated No. 2 at his position nationally out of high school, was a Heisman Trophy finalist and an Associated Press All-American after leading the nation with 16 1/2 sacks.

Guard Wyatt Davis was No. 1 at his position as a recruit and named an All-America this season. Running back J.K. Dobbins wasn't as highly rated but went on to become one of the nation's best running backs, rushing for 1,829 yards and 20 TDs this season.

Jeffrey Okudah and Shaun Wade were Nos. 1 and 2 at their positions as recruits and make up arguably the nation's best cornerback combo.

“Obviously, every recruiting class is going to hit top to bottom, but you see how the guys have really developed,” Okudah said. “Maybe not right away, but everyone has their own journey and the final step of this journey is everyone playing at a high level. It's kind of cool to see how it played out.”