Louisville forces 8 turnovers in rout of No. 10 Wake Forest 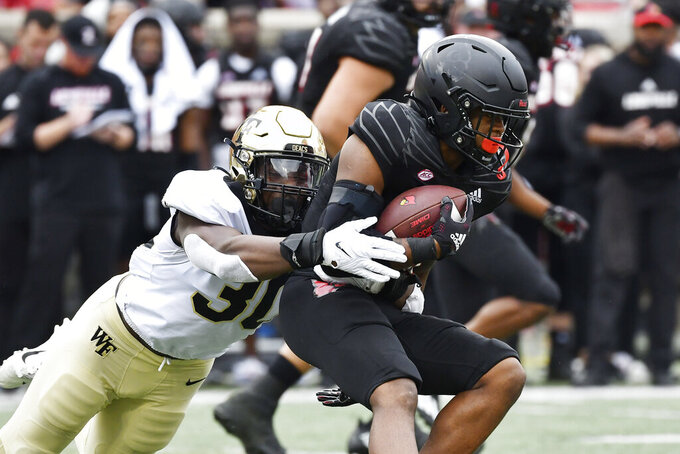 The Cardinals forced eight turnovers, returning two for touchdowns, and registered eight sacks in a 48-21 victory over the Demon Deacons on Saturday.

Six of those turnovers and both scores came in the third quarter. Louisville turned a 14-13 halftime deficit into a 34-point lead by the time Quincy Riley returned an interception 90 yards for a score on the final play in the period.

“The third quarter was remarkable,” Satterfield said. “I’ve never seen anything like it, and I’ve been in this game a long time.”

Louisville’s 35-point third quarter tied a record for the most points in a quarter against an AP Top 10-ranked team. According to Elias Sports Bureau, it had occurred three times previously, most recently by then-No. 5 Oklahoma against then-No. 2 Texas Tech on Nov. 22, 2008.

Louisville (5-3, 3-3 Atlantic Coast Conference) needed a rally after losing a 13-0 lead they held a minute into the second quarter. Kei’Trel Clark’s 46-yard interception return for a touchdown gave Louisville a 20-14 lead 47 seconds into the second half.

However, Louisville’s win was built on more than the turnovers. The Cardinals' eight sacks came from eight players.

“It just goes to show how much work our defense puts in,” quarterback Malik Cunningham said. “On both sides of the ball, we’ve struggled some this year, but the defense has been picking it up lately.”

It’s a far cry from the way Louisville’s defense looked earlier in the season. The Cardinals gave up 100 points in its three losses, including 34 in a loss at Boston College on Oct. 1. After that loss made Louisville 2-3, Satterfield told reporters he would spend more time with the defense.

On Saturday, Satterfield said the Cardinals had to mix up their coverage patterns against veteran quarterback Sam Hartman.

“When that happens, you are going to throw into some coverage, or you are going to get strip-sacked because you don’t know where it is coming from,” Satterfield said. “It was a great defensive game plan, and our kids executed it.”

Wake Forest entered Saturday having committed just five turnovers in its first seven games. According to ESPN, Wake Forest was the first team in at least 15 years to commit eight turnovers in a half.

Hartman also lost three fumbles and was sacked seven times as he was benched to start the fourth quarter. However, Wake Forest coach Dave Clawson said some mistakes were hard to put on his fifth-year quarterback and called the game a “disaster.”

“Clearly, I did not have our football team ready today,” Clawson said.

Louisville’s Tiyon Evans ran for 106 yards on 11 carries, including a 52-yard touchdown, in his first action since the Boston College game on Oct. 1.

This week, Wake Forest made the top 10 for the second consecutive year and for just the second time in its history. Unfortunately, the Demon Deacons’ stay will be brief once again.

Wake Forest: After committing two turnovers last week in the win against Boston College, Clawson was worried about committing turnovers against a rejuvenated Louisville defense. There was no way he could even imagine his team committing more in one half than the seven they committed in the entire 2020 season.

Louisville: The once-inconsistent Cardinals won their third straight game. The schedule is still very tough the rest of the way, and the Cardinals still aren’t bowl eligible. However, if Satterfield is on the Louisville sidelines next season, this game will be a major reason why.

Wake Forest travels to North Carolina State for a night game next Saturday.