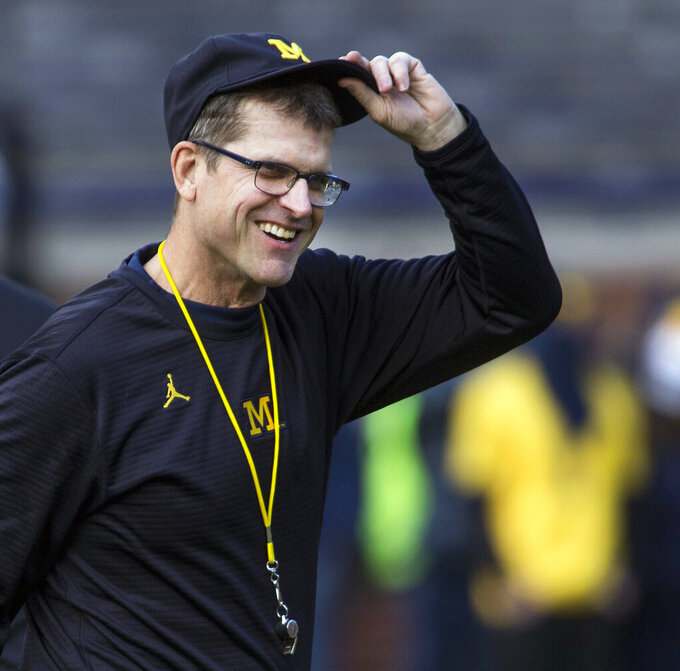 FILE - In this Nov. 25, 2017, file photo, Michigan head coach Jim Harbaugh adjusts his cap on the field during warmups before an NCAA college football game against Ohio State in Ann Arbor, Mich. Michigan finished the football recruiting cycle with the top-ranked class in the Big Ten for the first time since 2007, and four other conference programs were ranked in the top 25. (AP Photo/Tony Ding, File)

Michigan finished the football recruiting cycle with the top class in the Big Ten, and four other conference programs were ranked in the top 25 in the nation Wednesday.

Wolverines coach Jim Harbaugh added one player on the second letter-of-intent signing day to a 26-man class that was No. 1 in the Big Ten and No. 8 nationally, according to the 247Sports.com composite rankings. It was Michigan's first top ranking in the Big Ten since 2007.

Penn State coach James Franklin assembled a 23-man class made up of players from 11 states, including three from Florida and one from Oregon. The Nittany Lions were ranked No. 2 in the conference and No. 13 nationally.

Ohio State, which had been No. 1 in Big Ten recruiting eight years in a row and in 10 of the last 11, slipped to No. 3 during the coaching transition from Urban Meyer to Ryan Day. The Buckeyes' No. 14 national ranking was their lowest since 2010 and ended a streak of eight straight classes ranked seventh or higher. The drop is partly attributable to the 17-man class being Ohio State's smallest since 2007.

Nebraska and Purdue had the top two classes in the Big Ten West, coming in at Nos. 4 and 5 in the conference and Nos. 20 and 25 in the nation.

Four-star safety Quinten Johnson out of St. John's College High in Washington was the only player to sign with Michigan on Wednesday. He's drawn comparisons to ex-Wolverines star Jabrill Peppers, who played both defense and offense in 2015-16. Johnson has said he would be willing to do the same.

Kansas City-area three-star athlete Amauri Pesek-Hickson de-committed Monday over a disagreement about Harbaugh's request that he delay his enrollment and go to prep school. Pesek-Hickson signed with Kansas.

Penn State went all the way to Germany to bring in defensive tackle Joseph Darkwa. The 6-5, 270-pounder, whose mother moved from Ghana about 30 years ago, comes from the Dusseldorf Panthers' U-19 team in the German Football League. He also had offers from UCLA, Georgia Tech and Colorado, among other schools.

"O-line was an area of concern for us," Day said. "We had to go out there and kind of uncover all the stones. Flying out to Hawaii, staying for three hours, getting on a redeye back to Columbus was part of that plan. We wouldn't just go over to Hawaii if it wasn't a good fit. It was."

The recruiting tide continues to rise for Jeff Brohm at Purdue. The Boilermakers signed four four-star prospects in December, including two who will join a receiving corps that includes Big Ten freshman of the year Rondale Moore. Over three years Purdue has gone from 14th to 11th to fifth in the conference recruiting ratings and from 72nd to 51st and 25th nationally.

Maryland was the most active team in the Big Ten on Wednesday, adding 11 members to new coach Mike Locksley's 17-man class. The most notable signing was Lance LeGendre, a quarterback from New Orleans who chose the Terrapins over Florida State. The addition of the four-star LeGendre helped move the Terrapins from 14th to 12th in the Big Ten — still a long way from the No. 5 class brought in last year by former coach DJ Durkin.

"I feel real good about the team we have coming back. These 17 individuals will add to it," Locksley said. "We feel like we hit home runs with the guys we signed."

Northwestern hasn't cracked the top 10 in the Big Ten recruiting rankings since finishing eighth in 2014. Now consider the Wildcats went unbeaten against West Division opponents while reaching the conference championship game last season. The 2019 class is made up of 19 three-stars and was ranked 11th in the Big Ten. Since 2015, coach Pat Fitzgerald has signed just two four-stars and has gone 26-9 in Big Ten play, including 19-5 against the West.