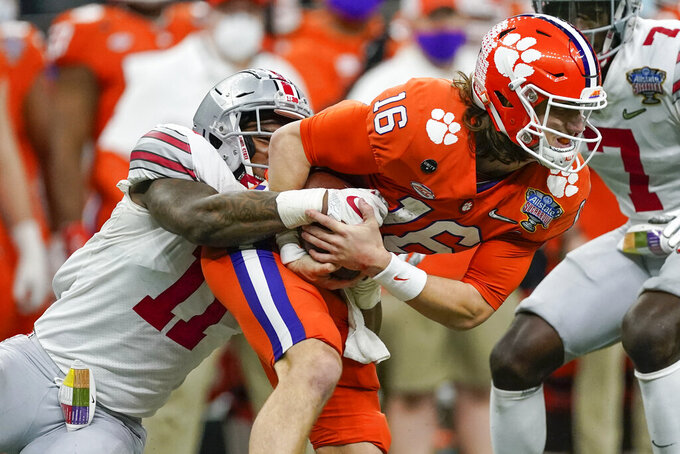 Former LSU linebacker Patrick Queen is a good example of how a huge performance in a national championship game can help a player boost his NFL draft stock.

Queen was a rising prospect throughout last season and capped it by being the defensive MVP of the College Football Playoff championship victory against Clemson. About three and half months later, Queen was selected in the first round by the Baltimore Ravens at No. 28 overall.

No. 1 Alabama and No. 3 Ohio State head into the national title game Monday night with a slew of future NFL players. The matchups will not only determine who wins a championship, but could also influence where some of their stars are drafted.

“You do want to look into a player's ability to play in the clutch and in the big moments because obviously when you're putting together a football team, an NFL roster, your goal is to be playing in the playoffs," said Jim Nagy, Senior Bowl executive director and a former NFL scout. "So you want to look at the consequential games. The games that really matter."

Alabama center Landon Dickerson, who is out with a knee injury, and guard Deonte Brown have already accepted invitations to the Senior Bowl on Jan. 30, Nagy said. Heisman Trophy-winning receiver DeVonta Smith, star running back Najee Harris and tackle Alex Leatherwood have also been invited.

There are perhaps 20 players who could potentially be drafted in April after playing for the Crimson Tide and Buckeyes.

Ohio State's Justin Fields was amazing against Clemson, throwing six touchdown passes and showing off accuracy and arm strength all over the field. He also displayed poise and toughness, playing most of the game after taking a nasty hit to his side.

That came after an inconsistent and truncated season that has called into question Fields' status as the best available QB behind Trevor Lawrence.

“There’s a lot of buzz around the league about (BYU's) Zach Wilson being the No. 2 pick in the draft behind Lawrence,” said Dane Brugler, a draft analyst for The Athletic. “Fields, with what he did, it changed that a little bit. He’s making teams kind of go back and reconsider.”

The Alabama defense has had some bumpy moments, but it is still the most talented group Ohio State has faced, starting with SEC defensive player of the year Patrick Surtain III. The junior will probably be the first cornerback drafted if he declares.

Plus, Fields will be tested by Alabama schematically.

“Give (Tide coach) Nick Saban 10 days to figure you out and to find your weaknesses, that's terrifying,” said Matt Miller of NFL Draft Scout.

Alabama quarterback Mac Jones is among the second tier of quarterbacks in the upcoming draft that includes Florida's Kyle Trask and maybe SMU's Shane Buechele.

Jones has been superb, but he doesn't have athletic traits comparable to Fields and Lawrence. Jones is surrounded by top-end talent, and offensive coordinator Steve Sarkisian has done a good job of scheming receivers open and creating mismatches.

“He’s a very, very difficult evaluation because how do you separate him from just an elite situation,” Brugler said of Jones.

Especially on the heels of former Alabama star Tua Tagovailoa’s rookie NFL season, which was solid but far from spectacular.

Ohio State cornerback Shaun Wade made the All-America team, but that was a generous evaluation based on reputation and last year's play when he was a nickelback and slot corner.

His move to the outside this season has been spotty at best and indicative of Ohio State's cornerback play in general. Now, he gets to face Smith, a sure first-rounder, and the gemstone of Alabama's prolific passing game.

“If I’m Alabama and Steve Sarkisian, I’m getting DeVonta Smith on (Wade's) side of the field as much as humanly possible because no one has been able to stop him,” Miller said.

"At the same time, if he goes out there and performs at a high level against Smith, then all of a sudden that’s a different conversation,” Brugler said. “But based on what we’ve seen from Shaun Wade this year, it just doesn’t seem like a realistic possibility.”

Alabama defensive tackle Christian Barmore is a third-team All-American and a third-year sophomore, so he is no sure thing to enter the draft.

The 310-pounder has not played at a consistently high level that would make him a lock first-rounder. Still, Brugler said the defensive line class is thin at the top of this draft and Barmore has a chance to be best of the bunch.

Ohio State running back Trey Sermon has gone on a remarkable late-season tear with 636 yards rushing in his last three games. He should expect to see a lot of linebackers Dylan Moses and Christian Harris, the top two tacklers for the Crimson Tide.

Nagy said Sermon looked like a potential starting NFL running back before injuring his knee last season while at Oklahoma.

“He's gotten his opportunity these past few weeks there for Ohio State and he's taken full advantage of those, but to do it against a Nick Saban defense in a national championship game would just be that next level for him,” Nagy said.