No. 1 Alabama faces No. 3 Ohio State for CFP championship 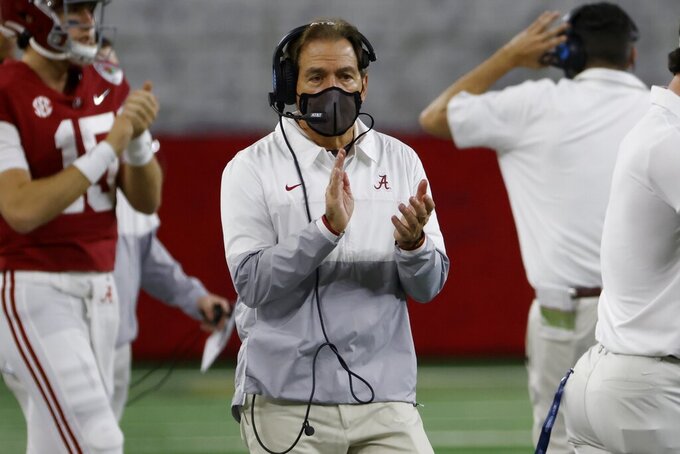 The Crimson Tide will play for their sixth national championship under coach Nick Saban, 13th overall in college football's poll era (1936-present) and first since 2017. Alabama is 2-2 in CFP championship games. A sixth title at Alabama for Saban would match Paul “Bear” Bryant's total with the Tide, but it would give him a record seven overall. He also won a BCS title at LSU in 2003.

For Ohio State, it would be its seventh national championship of the poll era and first since 2014, the inaugural season of the playoff.

Alabama's interior defense, led by DT Christian Barmore, vs. Ohio State interior offensive line with OG Wyatt Davis and C Josh Myers. The Crimson Tide had a couple of bad games defending the run early in the season against Mississippi and Georgia, but they have gotten much better since as Barmore's play as improved. Davis, an All-American, and Myers have been Ohio State's best blockers, leading the way for RB Trey Sermons' late-season surge (636 yards in the last three games).

Ohio State: QB Justin Fields. The junior is coming off the best game of his career and maybe the best game a quarterback has had this season. Fields threw six touchdowns and had only six incomplete passes in the Sugar Bowl against Clemson. He also took a nasty hit to the side that left him aching throughout the game. Fields' mobility is big part of his game. If he's limited, it takes away a key weapon for the Buckeyes.

Alabama: WR DeVonta Smith. The Heisman Trophy winner has been close to unstoppable in the second half of the season and had three more touchdowns on seven catches for 130 yards against Notre Dame in the Rose Bowl. Tide offensive coordinator Steve Sarkisian gets the most out of Smith and keeps defenses guessing by lining him up wide, in the slot and often sending him in motion.

Alabama receiver Jaylen Waddle, who broke his ankle on Oct. 24, returned to practice this week for the first time. Saban said Sunday that Waddle practiced to “some degree” and whether he plays will be a game-time decision. The coach also said Tide freshman defensive back Malachi Moore is questionable to play because of an undisclosed injury. He missed the semifinal against Notre Dame. ... If Ohio State wins the national championship, it will have played the fewest games of any title winner since Minnesota in 1941 went 8-0. ... Ohio State is 23-1 under second-year coach Ryan Day, including three victories in 2018 when he filled in as acting coach while Urban Meyer was suspended ... Saban spent two seasons in the early 1980s as an assistant coach with Ohio State under Earle Bruce. ... Alabama QB Mac Jones has completed 77% of his passes. The NCAA record for a single season is held by Colt McCoy, who completed 76.7% of his throws in 2008. ... The Tide is the first team to have players with at least 20 rushing touchdowns (Najee Harris, 24) and receiving (Smith, 20). ... Game organizers say 16,000 fans will be permitted to attend the game, in accordance with COVID-19 mitigation guidance.