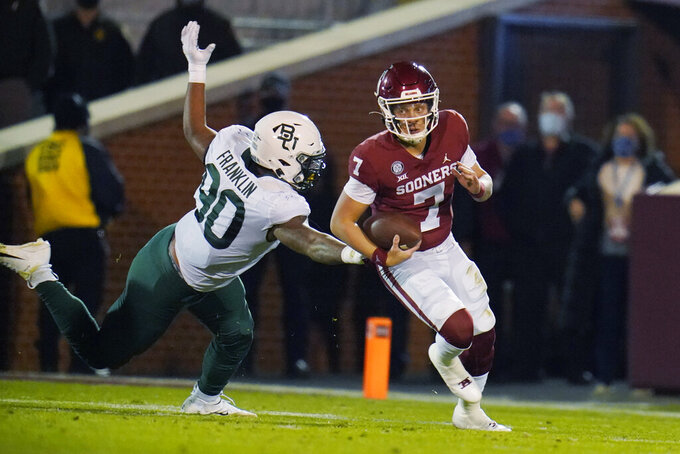 NORMAN, Okla. (AP) — Spencer Rattler's pass hit a Baylor defender in the hands, then somehow landed in Brayden Willis' arms for a touchdown.

It was that kind of night for Oklahoma — ugly, but good enough. Rattler threw two touchdown passes, and the 13th-ranked Sooners defeated Baylor 27-14 on Saturday night to earn a spot in the Big 12 Championship Game.

Oklahoma (7-2, 6-2 Big 12, No. 11 CFP) lost its first two conference games before winning six straight to earn the right to play Iowa State in the title game, which is scheduled for Dec. 19.

“It’s a really good accomplishment coming back from what this team has the entire year,” Oklahoma coach Lincoln Riley said.

Rhamondre Stevenson ran for a touchdown and had 98 yards from scrimmage for Oklahoma. The Sooners were limited to just 269 yards, but they did just enough in the second half.

“We knew if we put a couple of things together, things would start to work," Rattler said. “We stuck to the script and reads. We were off on a few little things tonight. We didn’t put together a clean game. We’ll work on that moving forward."

“I thought our guys weren’t coached worth a damn this week to be completely honest,” he said. “I don’t think us as offensive coaches did a very good job putting our guys in positions to succeed."

Oklahoma could not play last week because of COVID-19 issues and its game with West Virginia was postponed. With the coaching staff short-handed, former Sooners coach Bob Stoops was permitted to help with practice as OU prepared for Baylor.

The Sooners held Baylor (2-6, 2-6) to 288 yards, including 25 yards rushing. They did it without several key players, including linebacker Nik Bonitto, defensive back Brendan Radley-Hiles and safety Pat Fields.

Baylor's offense was short-handed as well. The Bears were without running back John Lovett, and running back Trestan Ebner was injured in the first half. Tight end Ben Sims also was hurt during the game.

Baylor coach Dave Aranda said the rushing effort was unacceptable, even with the injuries.

Baylor's Charlie Brewer completed 30 of 56 passes for 263 yards and a touchdown, and he ran for another score.

The Sooners finally broke through on Stevenson’s 3-yard touchdown run with 1:04 left in the first half. The Sooners led 10-0 at halftime, despite being limited to 99 total yards.

Baylor kicker John Mayers, who made the game-winning field goal against Kansas State the previous week, missed two field goals in the first half. The Bears gained just 110 yards before the break. It was the first time since 2015 that the Sooners held a Big 12 opponent scoreless in a first half.

Baylor finally scored in the third quarter when Brewer found Tyquan Thornton for a 25-yard score on fourth down after a penalty against the Sooners gave the Bears an extra chance.

Oklahoma pushed the lead to 20-7 on a 50-yard field goal by Gabe Brkic early in the fourth quarter, and Rattler's touchdown pass to Willis put the Sooners in control.

Brewer scored a short rushing touchdown with 59 seconds remaining to close out the scoring.

Baylor: The Bears couldn't handle Oklahoma's defensive line, and Brewer couldn't get anything going in the air or on the ground. The defense did more than its share against an Oklahoma offense that had averaged 55 points in its previous three games.

Oklahoma: This was the first time in a while that Rattler struggled to get going, and Stevenson was slowed down for the first time in four games since he returned from suspension. Oklahoma remained patient and did enough to gain control in the second half.

A source close to the search told The Associated Press on Saturday night that Beamer will become the head coach at South Carolina and take over the program run the past five seasons by Will Muschamp. The person spoke to the AP on the condition of anonymity because South Carolina has not yet made the hire official.

Beamer is the son of former Virginia Tech coach Frank Beamer. The younger Beamer has spent the past three seasons as assistant head coach and tight ends coach at Oklahoma. He’s also been involved with coaching special teams.

The Sooners held Kansas to 95 yards on 42 carries, then held Oklahoma State to 78 yards on 28 carries before allowing Baylor 25 yards on 26 attempts on Saturday.

Oklahoma’s defense overall has been dynamic, holding each of its past three opponents under 300 yards.

Oklahoma defensive coordinator Alex Grinch said he tested positive for COVID-19 on Monday, but it was a false positive, so he rejoined the team later in the week after two negative tests.