No. 14 Kentucky rested, eager vs Vanderbilt after week off 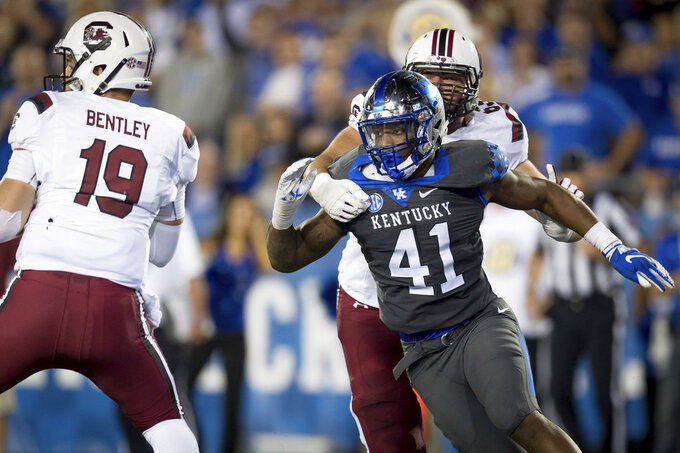 LEXINGTON, Ky. (AP) — The No. 14 Kentucky Wildcats hopes during their bye week they successfully addressed concerns raised in their lone loss preceding the break.

The Wildcats are eager for a reboot when they take on Vanderbilt on Saturday.

"We got a lot of work done, a lot of stuff corrected that in a week's time takes a little more effort," Kentucky junior linebacker Kash Daniel said. "With us having extra time, we got a chance to kind of walk our way into it, make sure everybody got the right communication, the right checks.

"Overall, I think we really needed that as a team."

Kentucky (5-1, 3-1 SEC) has had nearly two weeks to move past a 20-14 overtime loss at Texas A&M that marked a step back in many phases. At the very least, the Wildcats aim to avoid repeating last fall's flat post-bye performance that ended with a 45-7 pummeling at Mississippi State.

Kentucky players and coaches insist a lull isn't likely with an opportunity to clinch bowl eligibility and remain in SEC East contention. A half game separates the Wildcats from No. 8 Georgia and No. 11 Florida, which they've already beaten.

They enter homecoming as 11-point favorites over the Commodores (3-4, 0-3), who have lost four of five. Vanderbilt nearly broke into the win column last week against then-No. 14 Florida before blowing an 18-point lead in a 37-27 home loss .

Commodores coach Derek Mason insists his team remains confident their hard work will pay off with a long-sought SEC win.

"We're so close, sometimes the things that are happening to you, you're saying to yourself 'just stay the course,'" Mason said. "That being the case, this group is not built to back down.

"They're looking for the opportunity to break through to the other side."

Other things to watch as Vanderbilt visits No. 14 Kentucky:

Aggressive defense has keyed Kentucky's start with much of the disruption led by senior linebacker Josh Allen , who has six sacks among 10 1/2 tackles for loss that lead the SEC. Meanwhile, senior safety and leading tackler Darius West (68) is coming off an all-around performance highlighted by 10 stops, a 40-yard fumble return for a touchdown that forced OT and his team-best third interception. Their task is stopping Vandy quarterback Kyle Shurmur, the SEC's No. 5 passer with 1,629 yards and 11 TDs.

The Commodores hope to have their top rusher back after Ke'Shawn Vaughn had just eight touches for a combined 131 yards before getting hurt in the loss to Florida last week. He leads the Commodores with 495 yards rushing and six total TDs. He's averaging 6.9 yards per carry despite having only 72 rushes this season for an offense ranked last in the SEC and 89th nationally at 151.6 yards per game. Mason has made clear he wants to get Vaughn as much as possible to boost production.

Kalija Lipscomb led the SEC in catches the first few weeks, but the Commodores have struggled to find the junior receiver the past two games. He had only two catches for 16 yards in the loss at Georgia and four for 64 last week against the Gators. Those games dropped Lipscomb only to second in the league with 49 catches, and his 560 yards also put him second in the SEC. "We have to find that dude," Mason said. "He's too good of a player for us to miss him."

Kentucky is the SEC's second-most penalized team, averaging 7.7 flags for nearly 72 yards per game. Conversely, Vanderbilt has drawn the fewest flags at 5.4 for just 41 yards. Coming off a game in which the Wildcats were whistled eight times for 52 yards, coach Mark Stoops said improved execution was a focus during the bye. "We got a bit sloppy toward the back half of the first part of the season with penalties and some discipline, just being more precise in our execution," he said. "I felt like we got better in certain areas and getting back to things we needed to do."