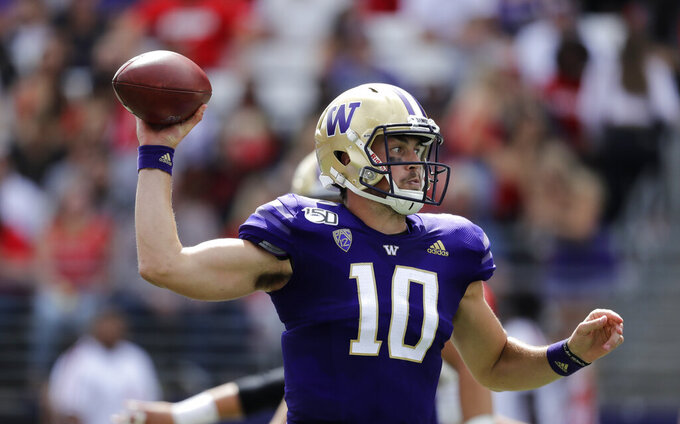 Shuffling out the contenders in the Pac-12 North begins early as the Golden Bears travel to Seattle. A year ago, California pulled a stunning upset, using a stifling defense to overwhelm the Huskies in a 12-10 victory. Cal's defense is still outstanding, but its offense needs work after struggling through a 27-13 win over UC Davis in the opener. Meanwhile, the Jacob Eason era started with a bang as the Huskies rolled Eastern Washington 47-14 behind four TD passes by the Georgia transfer.

California: LB Evan Weaver. He had 11 tackles in the opener, but it was his words after the victory that drew attention. In a question about Cal's defensive performance, Weaver said, "Right now it's not looking good. But we'll get it right. Then we'll fly up there and we'll beat them. That's what we do. We win games. We figure it out." Weaver had a 37-yard interception return for a touchdown, Cal's only TD, in the victory over Washington last season.

Washington: RBs Salvon Ahmed and Richard Newton. With all the attention on Eason's debut, Washington's run game in the opener was overlooked. Newton led the way with a surprising 91 yards on 12 carries and a TD. Ahmed added a TD run, but averaged less than 3 yards per carry.

Eason's 349 yards passing last week were most ever by a Washington QB in their first start. ... California has won five straight openers away from home including wins over BYU, North Carolina, Hawaii, Texas and Northwestern. ... Washington senior WR Andre Baccellia caught the first TD pass since the first game of his freshman season last week. Baccellia had caught a 4-yard TD on the second reception of his career and had 76 catches in the following 35 games without finding the end zone. ... Cal RB Christopher Brown Jr. had 197 yards on 36 carries in the opening win. It was tied for the most carries by any player in the country last week.