No. 18 Kentucky using bye to regroup, get back on track 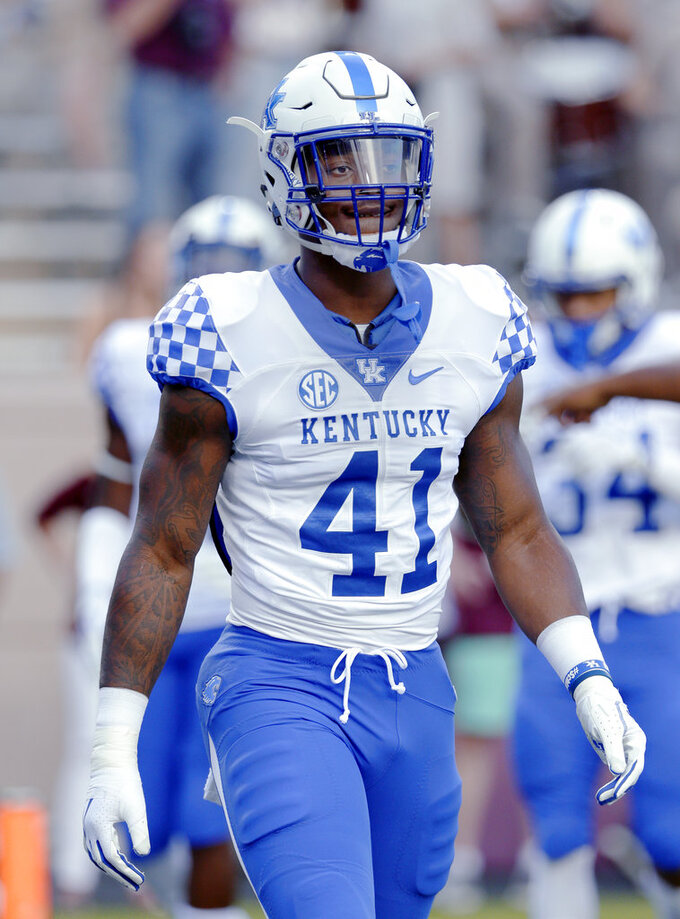 LEXINGTON, Ky. (AP) — Kentucky players and coach Mark Stoops are pleased with the strong start to the season that has the No. 18 Wildcats ranked for the first time in 11 years and contending in the competitive Southeastern Conference.

Last week's overtime loss at Texas A&M revealed flaws that need correcting, so the Wildcats plan to use this week's bye to address those issues.

"It's a perfect time, falling right in the middle of the season," linebacker Jamar "Boogie" Watson said this week. "Everybody's a little banged up and this week will help us refresh and regroup and have a great end of the season."

Kentucky (5-1, 3-1 SEC) hosts Vanderbilt on Oct. 20 to begin a second half it hopes will exceed its second consecutive 7-6 finish.

The Wildcats are focused on the positives that have translated into the SEC's third-ranked defense (304.8 yards) and a rushing game (223.5) that has also been near the top. Stoops and players expect to be get even better.

Last Saturday's 20-14 overtime loss against the No. 22 Aggies reminded Kentucky that they have work to do as they struggled in many phases of the game.

Tailback Benny Snell Jr. failed to rush for 100 yards or touch the ball in OT, a strategy that offensive coordinator Eddie Gran regretted afterward. Sophomore quarterback Terry Wilson struggled with execution, and the passing game remains a work in progress.

Kentucky's defense at times appeared outmuscled by A&M, and penalties continued to be a problem. The Wildcats sometimes seemed overwhelmed by playing before 100,000 Aggie fans still made enough clutch plays to force OT, another indication of poise and maturity they aim to ride to the next level.

Stoops wants to ensure those breakdowns don't become a pattern after doing so many things right.

"They've been really good to this point about staying on task and staying on the message," the sixth-year coach said. "They reiterate the message sometimes before I get to it, which is a good thing. They're already talking on the board talking about the things we must do and anticipating it, so that makes me very excited."

Projected to finish fifth among seven teams in the SEC East in a preseason media poll, the Wildcats and No. 14 Florida are both within a game of first place and second-ranked Georgia. Last month's 27-16 upset of Florida in the Swamp provided a breakthrough, not only ending a 31-game losing streak against the Gators but a offering glimpse at a program trending in the right direction.

"It was big," tight end C.J. Conrad recalled of the Florida win. "When you go on the road like that in a big-time atmosphere against a team you haven't been very successful against, a win like that really helps us and propelled us these last couple of weeks.

"We're a lot better football team now and believe we can win."

The Wildcats are confident about the remainder of the season, including the Nov. 3 home matchup against Georgia.

This week they've focused on retooling some things and being careful not to look too far ahead.

"We're there, but we're not there yet because it's not the end of the season," guard Bunchy Stallings said. "It just made us realize that the preparation we put in matters. The work we did over the summer, it just has to show now.

"That's what the second half of the season is about. We know we need to go out there and prepare and get as many (wins) as we can."